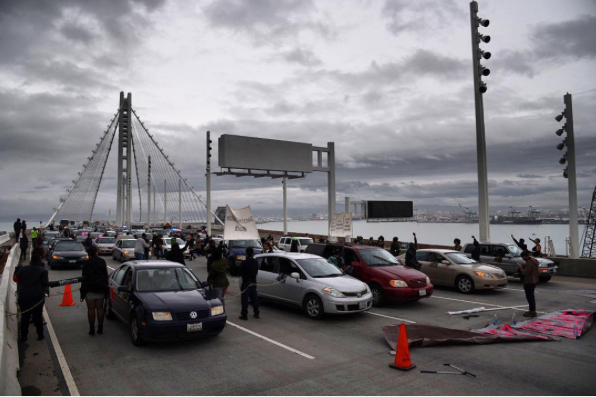 OAKLAND (KRON) – More than a thousand demonstrators shut down several Bay Area roads, including the westbound Bay Bridge lanes near Treasure Island and Interstate 80 ramps in Emeryville, demanding justice in the wake of the Mario Woods shooting earlier in December.

But just after 4:30 p.m., all westbound lanes of the Bay Bridge have reopened after protesters shut down all lanes just east of Treasure Island Monday afternoon, according to the California Highway Patrol.

Twenty-five people were arrested for impeding the flow of traffic, unlawful assembly, and being a public nuisance, the CHP said.

Traffic on the Bay Bridge came to a complete stop earlier Monday afternoon as protesters took over all five lanes. Images from the scene appear to show protesters tethered to each other and holding signs with the words “black health matters.” Traffic is backed for miles on the Bay Bridge into the toll plaza.

The Powell Street off-ramp to Highway 80 is closed because of the protest, CHP officials said at about 3:10 p.m. Traffic is disrupted in the area.

Monday’s organized rally started at the Frank Ogawa Plaza located on 14th St. and Broadway. Protesters are expected to march to the Bay Street Mall in Emeryville near where suspected shoplifter Yuvette Henderson was shot and killed by Emeryville police officers last February.

Woods was shot and killed when he refused to drop a knife, authorities have said. Woods had been sought in connection with a stabbing before the deadly confrontation with officers.

Police have said officers opened fire on Woods after he moved toward them with a knife. Videos circulated widely on social media that appear to show Woods limping away from officers at the time he was shot.

“Over the last year, in the Bay Area alone, there have been dozens of police murders. In San Francisco, we have most recently seen the brutal execution of Mario Woods, in addition to police beating a disabled man in front of the Twitter building and racist text messages exchanged between SFPD on-duty officers,” the Anti Police-Terror Project says on its Facebook page.

John Burris, who is representing Woods’ family, said San Francisco police have engaged in a pattern of excessive force and illegal stops and detentions of Latinos and African-Americans that warrants a probe by the U.S. Department of Justice.