3 arrested in connection with deaths of 71 migrants in truck 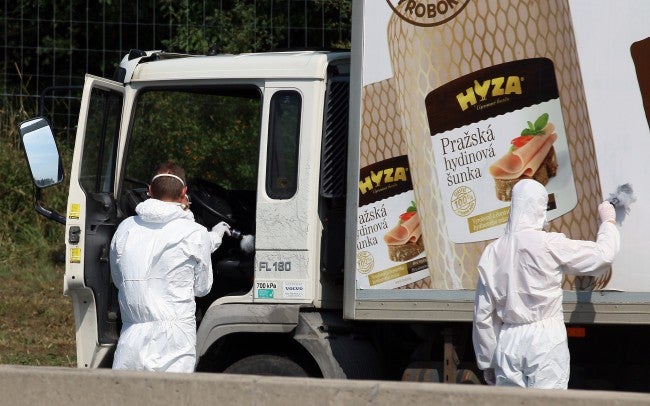 VIENNA (AP) – Three people believed to be part of a human smuggling operation were arrested overnight in Hungary in connection with the deaths of 71 migrants found in a refrigerated truck abandoned on Austria’s main highway, law enforcement officials said Friday.

It was the latest tragedy in a year that has seen tens of thousands of people risking everything to seek a better life or refuge in wealthy European countries.

At least 2,500 have died, mostly at sea, where another tragedy was unfolding Friday as Libyan authorities counted bodies from two ships that capsized off the coast of that country. The U.N. refugee agency said 200 were missing and feared dead.

In Austria, officials said they are still investigating but believe the migrants suffocated in the truck. Investigators found a Syrian travel document, indicating that at least some of the dead were refugees fleeing violence in Syria, though it wasn’t clear if some were from elsewhere.

The 71 included eight women and four children, the youngest a girl between 1 and 2 years old, the others boys aged 8 to 10. Authorities initially estimated the death toll at 20 to 50, but raised it after towing the truck to a refrigerated warehouse and counting the partially decomposed bodies.

Migrants fearful of death at sea in overcrowded and flimsy boats have increasingly turned to using a land route to Europe through the Western Balkans. They start in Greece, which they can reach via a short boat trip from Turkey, then move on through Macedonia, Serbia and into Hungary, where thousands have been crossing the border every day, crawling over or under a razor-wire fence meant to keep them out.

Most go from there to other countries in the European Union, sometimes paying smugglers to drive them, but the discovery of the bodies in the truck showed there is no truly safe path.

Police in Hungary said that as of Tuesday, 776 suspected human smugglers had been detained so far this year, compared to 593 all of 2014. In the southern part of the country, police said they had found 18 Syrians near an overturned van on the M5 highway between Szeged and Budapest early Friday. Ten were taken to the hospital for treatment while the driver, a Romanian, was treated for head injuries and then taken into custody on suspicion of human smuggling.

The truck with the 71 migrants inside was found parked in the safety lane of the highway from Budapest, Hungary, to Vienna on Thursday. It was not clear how long the bodies had been in it, but police believed they may already have been dead by the time the truck crossed the border into Austria overnight Wednesday. Autopsies were being conducted, said state prosecutor Johann Fuchs, with results expected in several days.

At least two of those arrested are Bulgarian citizens, while the third has Hungarian identity papers, police said. One is the truck owner, a Bulgarian of Lebanese descent, while two others were apparently taking turns driving, said Hans Peter Doskozil, chief of police in Burgenland province, where the truck was found. He said police believe that the suspects were part of a larger Bulgarian-Hungarian human smuggling ring.

Fuchs said it was unclear when the suspects would be extradited by Hungarian authorities, who were looking to see if they had jurisdiction in the case. Romania’s foreign ministry also said that 12 Romanians had been detained in Hungary on suspicion of human trafficking and Hungarian authorities are seeking to arrest them.

Interior Minister Johanna Mikl-Leitner said the tragedy “should serve as a wake-up call … for joint European action” in dealing with the torrent of migrants flocking to Europe. Melissa Fleming, spokeswoman for the U.N. refugee agency in Geneva called the tragedy “absolutely shocking.”

“We believe this underscores the ruthlessness of people smugglers who have expanded their business from the Mediterranean Sea to the highways of Europe. It shows they have absolutely no regard for human life, and that they are only after profit,” she said. “It also shows the desperation of people seeking protection or a new life in Europe, and their only means is to submit themselves to these criminals.”