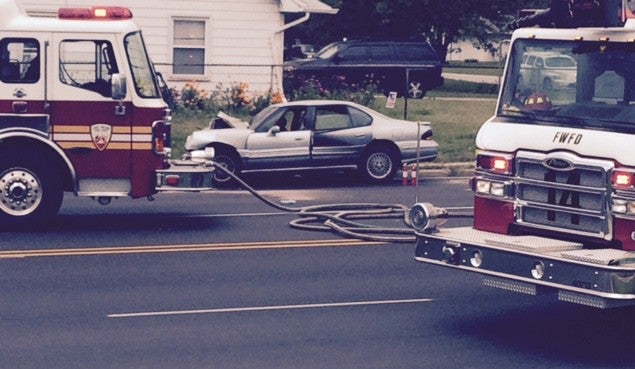 Around 2:30 p.m., workers at the Meijer store at Maysville Road reported a shoplifting there. Shortly thereafter, an off-duty officer spotted a car that matched the description and tried to pull it over.

Instead, it sped away.

The suspect’s vehicle hit at least two other vehicles while fleeing from police in the area of State and Reed. Police chased the car through the city’s northeast side, from Maysville through the Georgetown area to the State and Coliseum boulevards area. The chase reached speeds upwards of 60 mph, police said, so high in fact that officers considered calling it off for fear it was unsafe for the public.

The chase eventually veered into the State and Inwood intersection, where officers used stop-sticks to stop the vehicle and it eventually crashed.

A woman said police then ordered the driver to put his hands up. Two men and a woman were inside the vehicle.

Three people were taken from the scene with injuries, dispatchers said. It’s unclear, though, whether those people were from the chase vehicle or other motorists or pedestrians.

A small fire broke out in the suspect’s car after it crashed but fire crews were able to put it out quickly.

The area, including heavily traveled State and Coliseum boulevards, was closed to traffic as police investigated and cleared the scene.

Police Chief Garry Hamilton and Public Safety Director Rusty York were both called to the scene to help investigate.