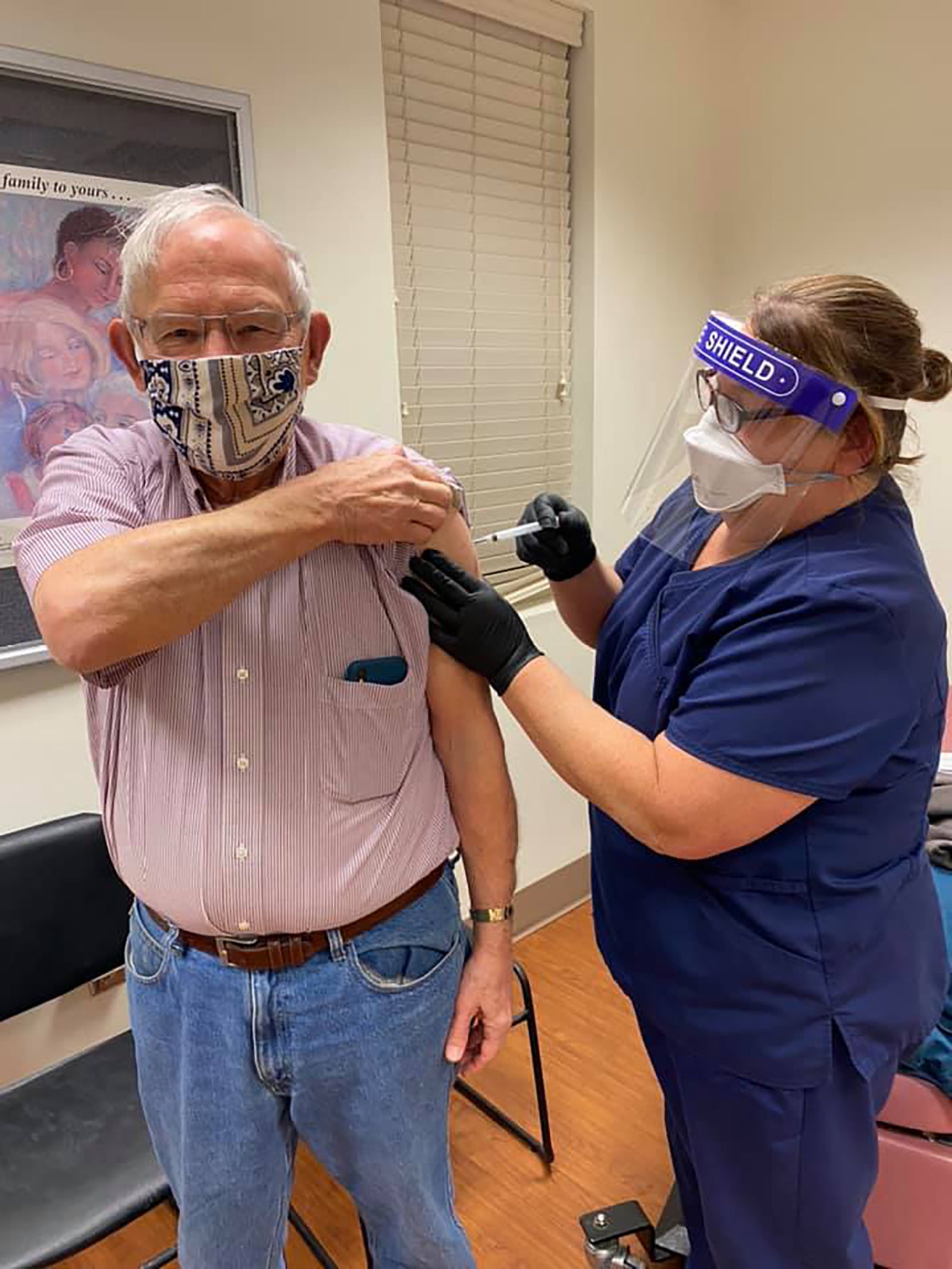 (CNN) — The Trump administration enters 2021 well short of its goal to vaccinate 20 million people by January 1, leaving state health officials across the country scrambling to ramp up a massive vaccine distribution effort that is crucial to defeating the pandemic and yet faces critical delays.

Some states have expressed disappointment with the rollout, acknowledging their own issues but also seeking more federal resources amid concerns about the burden they now have to get vaccines into patients’ arms. In several cases, local snafus on the ground have created their own delays, not to mention dangerous and costly mistakes.

In West Virginia, for instance, 42 people were mistakenly given a Covid-19 antibody treatment instead of the coronavirus vaccine, according to the West Virginia National Guard. In Wisconsin, police have arrested a recently fired pharmacist who they say removed 57 vials of the Moderna vaccine from a local hospital’s refrigerator and left them to sit out, leading to 500 doses being discarded.

With no federal mandate for how to administer the vaccine, it’s up to the states to decide who gets the vaccine and when, creating a confusing patchwork of rules that vary greatly across the country. While some states are focused exclusively on health care workers, others have started vaccinating the elderly and other frontline workers, too.

West Virginia Gov. Jim Justice announced people over 80 were eligible to receive the vaccine on Wednesday, while Tennessee’s health department said it would begin administering the vaccine to residents 75 and older, teachers and childcare workers.

Florida has put in place a county-by-county plan for vaccinating its elderly population, leading to hours-long lines at vaccination sites in a southwest Florida county that was distributing on a first-come, first-serve basis.

Texas has only distributed one-third of the vaccines it has received so far, according to numbers released on the state’s vaccine dashboard. And in Ohio, Republican Gov. Mike DeWine said he is not satisfied with the number of vaccines that have been administered in his state, as well as the compliance of those in priority groups electing to receive the vaccine.

Several states have also said it’s been difficult to plan a vaccine rollout when their supply numbers from the Trump administration are constantly changing and they are only receiving information on vaccine supply on a week-to-week basis.

“There is no federal organization, no federal rollout, there is no coordination between the federal government and state governments,” Pennsylvania Lt. Gov. John Fetterman, a Democrat, said on CNN “Newsroom” Thursday.

Sen. Mitt Romney, a Utah Republican, blasted the Trump administration’s vaccine distribution effort as “woefully behind” on Friday. “That comprehensive vaccination plans have not been developed at the federal level and sent to the states as models is as incomprehensible as it is inexcusable,” he said in a statement.

Romney urged the federal government to bring in people who have previous experience delivering vaccines and medical workers who are not currently engaged in delivering care, as well as to create vaccination sites in every state and to schedule vaccinations for people.

“Unless new strategies and plans are undertaken, the deadly delays may be compounded as broader and more complex populations are added,” Romney said. “We are already behind; urgent action now can help us catch up.”

Dr. Anthony Fauci, director of the National Institute of Allergy and Infectious Diseases, said Thursday on NBC’s “Today” that the federal government could still help states ramp up vaccine distribution without controlling every step. “Rather than stepping in and taking over, I think it would be maybe better to give more resources and to work with them, in tandem with them,” said Fauci, who is also advising President-elect Joe Biden. “In other words, not saying we’re taking over, we’re going to do your job, but saying we’re going to really help you to do your job, particularly by giving you many more resources.”

States are realizing, however, that they aren’t getting a major funding boost from the federal government for now, after the latest stimulus bill passed in Congress without billions of dollars in state and local relief that Republicans had opposed.

Trump administration officials insist that a lag in states’ reporting vaccinations is one reason for the low numbers, but they acknowledged this week that even with the lag, the numbers are behind and the federal government needs to be doing a better job addressing bottlenecks.

“We know that it should be better, and we’re working hard to make it better,” Dr. Moncef Slaoui, chief scientific adviser for Operation Warp Speed, said at a Wednesday news briefing.

According to one Republican state official, one big problem has stemmed from states being placed in charge of all of the logistical decisions of getting the vaccine to providers once they receive shipments from the federal government, particularly the so-called “last mile” the vaccine travels before it’s given to individuals.

Another difficulty has been the vaccines’ complicated storage and transport needs, because many of the providers do not have the necessary tools to handle the storage requirements. This official also noted that many medical facilities have also had to provide training on how to handle and administer the vaccine.

President Donald Trump has sought to shift blame for the slowdown, telling states they were effectively on their own. “The Federal Government has distributed the vaccines to the states, he tweeted Wednesday. “Now it is up to the states to administer. Get moving!”

President-elect Joe Biden charged Tuesday that the Trump administration’s plan to distribute vaccines had fallen “far behind,” pledging to provide more federal leadership and administer 100 million shots to cover 50 million people within the first 100 days of his administration, though adding that Congress would need to provide funding to hit that goal.

A senior Trump administration official stressed that states failing to report more quickly is contributing to the lag, something Operation Warp Speed Chief Operating Officer Gustave Perna said will “tighten up” as reporting becomes more routine. But unlike Trump, other administration officials have acknowledged there are shortcomings and room for improvement.

“We would have liked to have seen it run smoothly and have 20 million doses into people today by the end of the 2020, which was the projection. Obviously, it didn’t happen. And that’s disappointing,” Fauci said Thursday.

The US has granted emergency authorization to two vaccines so far, from Pfizer and Moderna, with others potentially coming online in the US next year that would help accelerate the timeline for people to be vaccinated.

Both vaccines require two doses: The Pfizer shot requires a second dose 21 days later and the Moderna vaccine 28 days later. Currently, those second doses have been held back by the federal government, so they will be available and administered when they are needed to provide those second doses.

But Fauci suggested Thursday that spreading out the first doses to more people is “under consideration” to help broaden the number of people who can get vaccinated, though that opens up the risk that manufacturing problems could prevent people from receiving the second shot.

“I still think, if done properly, you can do a single dose, reserve doses for the second dose, and still get the job done,” Fauci said on Today, “but there’s a lot of discussion about whether or not you want to spread out the initial vaccination by getting more people vaccinated on the first round.”

Dr. Leana Wen, a CNN medical analyst and former Baltimore Health Commissioner, said that the federal government should have built and funded infrastructure to distribute the vaccine months ago while they were still in development and ramping up production.

“What’s gone wrong in this process? We need to have a real-time tracking to see where the holdup is,” Wen said on CNN’s “Newsroom” Thursday. “We need to have a lot more resources dedicated to the distribution and not just to the scientific development, because otherwise, Operation Warp Speed for the science is clearly not translating into warp speed for distribution.”

Issues with the lags for distributing the vaccine are not universal across the country. Some state officials say they have been pleased with the system thus far.

“We knew it was a complicated process. We’ve been surprised at just how smooth it’s been going,” one state official in the Southeast told CNN.

But those sentiments underscore the divide within the states, with numerous state health officials saying they still need more funding.

“The state health departments are stretched to the absolute max fighting Covid, doing testing. County and local are in the same boat,” a state official in the Northeast told CNN. “It’s not just the scale of the vaccine operation but putting that on top of what states are already dealing with.”

1 seriously injured in west side shooting