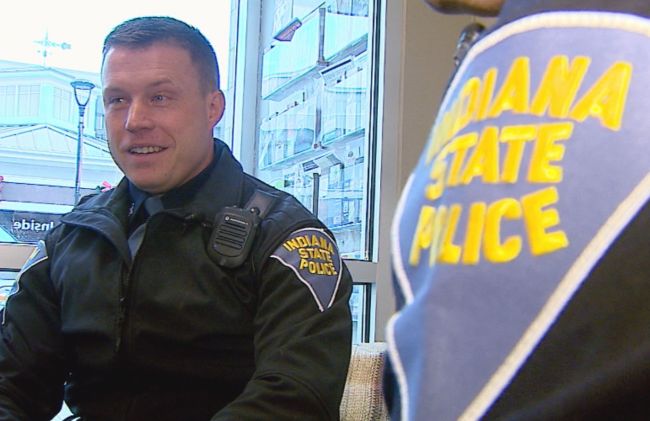 INDIANAPOLIS (WISH) – A stranded driver got a Thanksgiving surprise that created a memorable meal and a lesson for two Indiana State Police troopers.

Trooper Daniel Criswell is training Ty Mays. For three months, no lesson stood out until the pair pulled over on Interstate 70 Wednesday.

“I don’t know why this guy stuck out so much,” Criswell said. “I think because it was a holiday, and I truly felt like he didn’t have anybody — he really didn’t.”

The two approached a driver in a disabled van near the airport. “He was very humble, very kind,” Mays said. “It’s one of those people that you just feel for. You had that feeling that he was just great man in a bad spot.”

“He just wanted some guidance,” Criswell added. “He was very respectful, very humble, and he didn’t want much.”

The troopers moved his vehicle to the shoulder, got him something to eat and left. But the kind deeds didn’t end Wednesday.

“Of course, everybody is saying what they’re thankful for, and I thought, how can I help someone else be thankful today?” Criswell said. “He came to my mind, and I wanted to help him.”

Criswell went back to I-70 on Thanksgiving Day and found Daniel Breaux asleep. “You always want to err on caution on who you deal with,” Criswell said. “I had a pretty good feel for this guy, and I was just going to go with my instincts.”

He decided to pay for parts and fix the van at his house. The problem: finding a tow company to move it.

The company not only moved the van on a holiday, but didn’t ask for money. “The guys that deserve the credit are the troopers, the ones that really started this chain of events,” Davis said. “They deserve the credit, we just saw an opportunity to help somebody and lend out a helping hand.”

As Criswell’s family worked on the van, they invited Breaux to dinner. But the van’s problems were worse than they expected.

That’s when Criswell’s brother stepped in. “He offered to give him a truck he didn’t use, and that kind of caught everyone by surprise,” the trooper explained.

A chance encounter that not only gave a stranded driver a way home, but a lesson this trooper hopes will show his trainee what it means to be an Indiana State Police trooper.  You may not know that it’s going to happen, but at the end it kind just plays out,” Criswell said.