Biggest Valentine’s card ever? Husband rents billboard for his wife 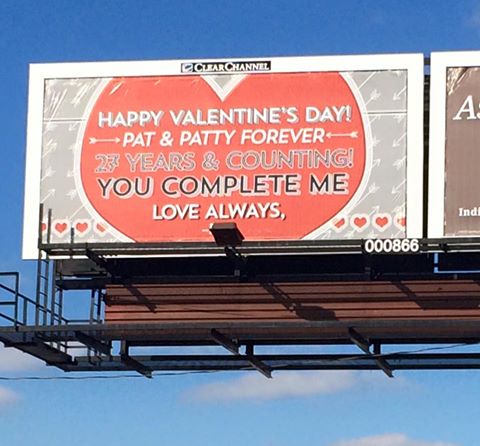 But he had something different in mind this year.

“When I was driving north on Emerson Ave., I saw these billboards and I thought that would make a really nice big Valentine’s card,” he said.

“I think he really went overboard, I have the biggest card I guess I could say,” his wife Patricia Sullivan said.

Pat surprised Patty with the billboard this week.

It’s up at the corner of Emerson Avenue and Thompson Road near Beech Grove.

“And I just started gasping and crying, just like oh my gosh, I can’t believe it,” Patty said.

“She just started crying and she just totally lost it and that’s what I wanted to surprise her and let her know how special she is and let her know that these 27 years have been great for me,” Pat said.

The pair married in 1988 and have three kids and a new grandchild.

They have some advice for a long and happy marriage.

“We just take it day by day and just try to love each other and show each other that and communicate,” she said.

As for next Valentine’s Day, Patty’s just a little worried.

He picked the location because it’s on their drive into work, so she can see it every day for the next month.