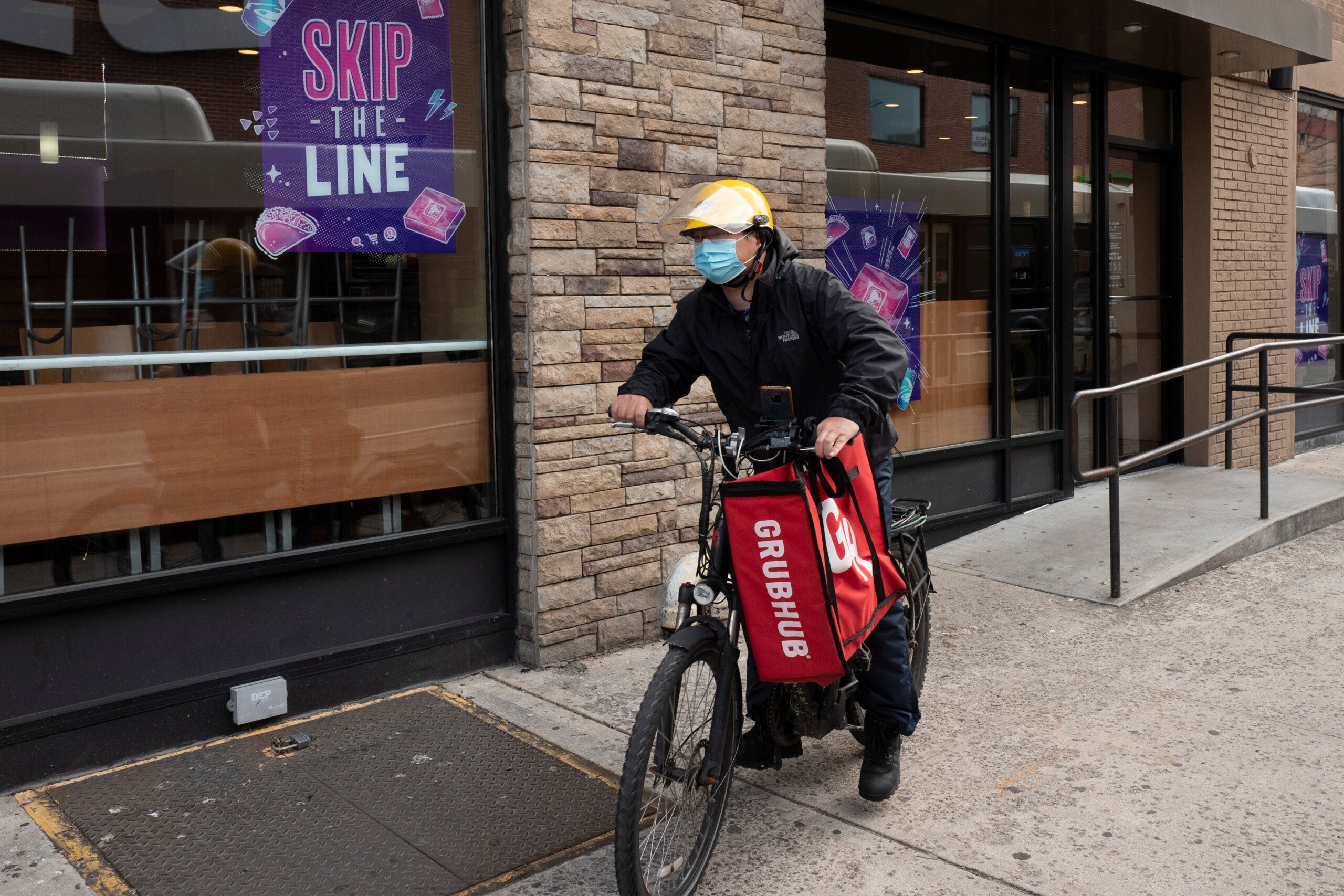 FILE - In this April 21, 2021 file photo, a delivery man bikes with a food bag from Grubhub in New York. The three biggest food delivery companies, DoorDash, Grubhub and Uber Eats, are suing the City of New York, Friday, Sept. 10, over its law to permanently limit the amount they can charge restaurants that use their services.(AP Photo/Mark Lennihan, File)
by: MICHELLE CHAPMAN AP Business Writer
Posted: Sep 10, 2021 / 02:18 PM EST / Updated: Sep 10, 2021 / 02:18 PM EST

(AP) — Three of the nation’s largest food delivery companies are suing New York City over a limit on fees it put in place during the pandemic to protect restaurants devastated by the forced closure of their dining rooms.

The city has continued to extend those caps even as vaccinations allow more indoor dining which, according to the companies, cost them millions of dollars over the summer.

In the suit filed late Thursday the U.S. District Court for the Southern District of New York, DoorDash, Grubhub and Uber Eats call the fee caps government overreach. The companies say they were “instrumental in keeping restaurants afloat and food industry workers employed” after investing millions of dollars in relief for those businesses.

They are filing for an injunction that would prevent the city from enforcing an extension on the fee caps adopted in August.

The companies are seeking unspecified monetary damages as well as a jury trial.

New York Law Department spokesman Nicholas Paolucci said in an email that the city’s initiative is legally sound and will be defended in court.

The city of New York first enacted the price cap in May 2020 in response to the pandemic, limiting the rate that third-party platforms could charge restaurants at 15% of an online order for delivery services, and 5% for all other services, including marketing.

Last month, New York City Council passed a handful of bills it said would help small restaurants, like prohibiting some third-party delivery service charges and mandating that their phone numbers are listed on those delivery sites.

It also pushed forward an extension on the fee caps that would not expire until at least early next year.

Food delivery services, Grubhub, DoorDash and Uber Eats among them, that experienced explosive growth during the pandemic are increasingly clashing with local governments who say restaurants and consumers are getting hit with exorbitant fees and high costs.

Last month Chicago officials accused DoorDash and Grubhub of harming the city’s restaurants and their customers by charging high fees and through other deceptive practices. Delivery companies have been the target of legal authorities in other cities and states before, but those efforts have targeted specific policies compared to Chicago’s attack on numerous elements of the companies’ operations. The companies called Chicago’s lawsuits baseless.

San Francisco’s district attorney has accused delivery companies of violating California law by classifying drivers as contractors. And Washington, D.C., reached a settlement with DoorDash in 2019 after alleging the company misled customers about how much drivers received in tips.

The Massachusetts attorney general’s office in July filed a lawsuit accusing Grubhub of charging restaurants illegally high fees during the pandemic. The state had capped fees for much of 2020.

In the lawsuit filed late Thursday, Grubhub, DoorDash and Uber Eats argue that New York city has continually pushed back the expiration date of the price caps and that now there’s no date at all, making them permanent. They also claim that the law has cost them “hundreds of millions of dollars” through July.

“The ordinance is unconstitutional because, among other things, it interferes with freely negotiated contracts between platforms and restaurants by changing and dictating the economic terms on which a dynamic industry operates,” the lawsuit states.

Food delivery companies, despite soaring revenues, have delivered mixed economic results even as they were transformed into a critical service during the pandemic.

Orders handled by DoorDash reached unprecedented levels during its most recent quarter and while revenue growth slowed from the height of the pandemic, the company said last month that sales were still up an astounding 83%, to $1.24 billion.

Yet the company lost $102 million. Start-ups have to invest large sums to grow and delivery start-ups say that has grown worse as they are forced to spend more to lure new drivers as infections rise. DoorDash said that fee caps cost it $26 million during the most recent three-month reporting period.

“Imposing permanent price controls is an unprecedented and dangerous overreach by the government and will limit the options small businesses rely on to compete in an increasingly competitive market,” the company said.

DoorDash has already filed suit to block a cap on fees put into effect by San Francisco.