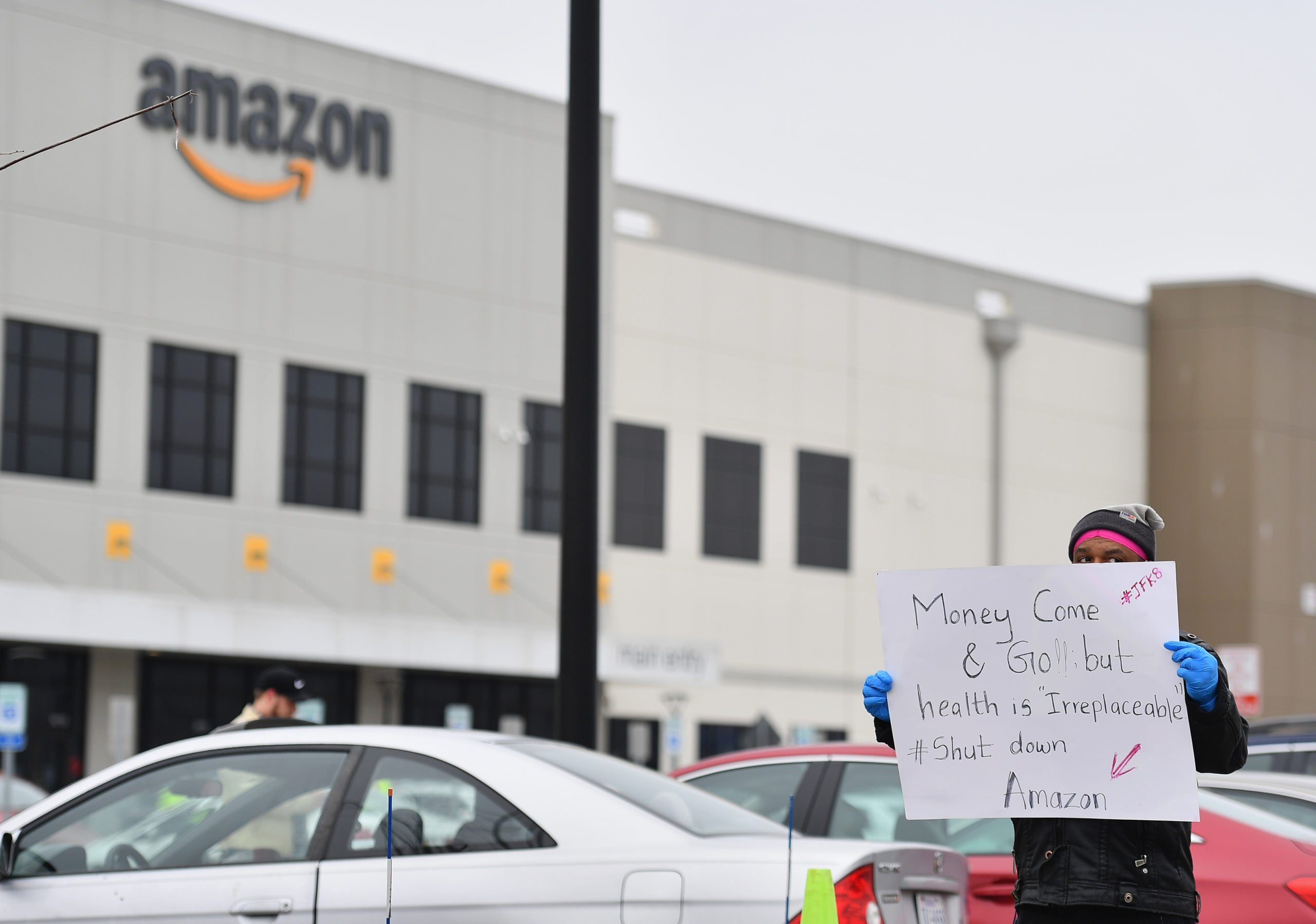 Amazon workers at Amazon's Staten Island warehouse strike in demand that the facility be shut down and cleaned after one staffer tested positive for the coronavirus on March 30, 2020 in New York. - Amazon employees at a New York City warehouse walk off the job March 30, 2020, as a growing number of delivery and warehouse workers demand better pay and protections in the midst of the COVID-19 pandemic. (Photo by Angela Weiss / AFP) (Photo by ANGELA WEISS/AFP via Getty Images)
by: Sara Ashley O'Brien, CNN Business
Posted: Mar 30, 2020 / 10:18 PM EST / Updated: Mar 30, 2020 / 11:26 PM EST

(CNN) — Workers helping to get household essentials to people across the country during the coronavirus pandemic are fed up with the companies they work for. On Monday, they offered their strongest public demonstration of their frustration yet.

Some Instacart workers said they turned off their app Monday to call attention to their concerns around the company’s treatment of workers during the public health crisis. Meanwhile, some workers at its Staten Island facility protested just after noon amid allegations the company has mishandled its response to coronavirus. Amazon has confirmed two cases at this facility to CNN Business. One protestor carried a sign that read: “Our health is just as essential.”

The strikes highlight a fundamental tension in the tech industry right now: Business such as Amazon and Instacart are experiencing so much demand from customers wary of stepping outside that they have announced plans to hire 100,000 warehouse workers and 300,000 shoppers, respectively. But the workers who are the backbone of these businesses have told CNN Business they believe both companies are not doing enough to protect them.

Some Instacart workers plan to continue striking against the company until it meets their demands, which include hazard pay, expanding coronavirus sick pay to include coverage for those with underlying health conditions, and changing the default tip from 5% to 10% on all orders. Meanwhile, others told CNN Business they will continue working, citing fear of retaliation as well as an unwillingness to leave customers in the lurch. But they feel similarly that Instacart needs to improve worker conditions at a time when the importance of their jobs is felt by customers more than ever.

“Many of us are much more fearful for our lives than any retaliation this strike may bring,” according to a statement from Gig Workers Collective, the newly formed non-profit leading the Instacart strike effort. “Standing up for ourselves is always a gamble… but we’re not scared.”

In a statement to CNN Business about the strike, Instacart said, “we’ve seen absolutely no impact to Instacart’s operations. Today, we saw 40% more shoppers on the platform compared to the same day and time last week.”

The company said it has had 250,000 new people sign up to work as independent contractors in the past week and 50,000 of them have already started doing so. “We respect the rights of shoppers to provide us feedback and voice their concerns,” the company said.

Ahead of the strike, Instacart made some updates, including stating it would soon make hand sanitizer available for workers to order free of cost on its website. But workers told CNN Business the changes barely scratch the surface of their complaints. In addition to the organizers’ demands, some Instacart workers said the company’s pay structure means they can sometimes make as little as $5 to $7, not including tips or mileage, for fulfilling multiple orders. (Instacart said its minimums have been in place for more than a year and that workers can choose which jobs they want to take.) Some also expressed frustration that when issues arise, they sometimes wait hours — which is unpaid time — to get answers from the company’s customer service department. They questioned how the company could add hundreds of thousands more workers when there’s little support for the ones they already have.

Instacart told CNN Business it is working to scale up its customer service team to meet the increased demand. It has also made some recent updates to preempt some common worker concerns, such as temporarily removing customer ratings so workers aren’t penalized when high-demand items aren’t found in stores.

Amazon has faced criticism, as well. In interviews with CNN Business, Amazon workers have raised concerns about worker conditions at its warehouses around the country, including what they claim was pressure to work longer hours as well as a lack of worker screening for possible coronavirus symptoms, adequate social distancing measures and protective gear. Amazon warehouses are facing a growing tide of coronavirus cases with at least 13 facilities hit so far, according to Amazon and local media reports. A company spokesperson confirmed Monday that at least one worker has tested positive at its Kent, WA, and Eastvale, CA, facilities.

Both Amazon and Instacart have announced policies offering some form of sick pay for those who fall ill with coronavirus or are placed into quarantine. For Instacart workers, it’s unclear just how helpful that has been. According to Gig Workers Collective, a “big push for the timing of this strike was seeing our fellow shoppers being denied the ‘sick pay’ offered by Instacart.”

When asked about this, Instacart reiterated its policy on the matter and said it communicates with workers who have submitted documentation that doesn’t meet its criteria in order to help them understand what is needed to qualify for the pay.

“Workers across the service industry are suffering. And yet they are indispensable during this critical time,” said Veena Dubal, a labor law expert and associate professor at the University of California, Hastings College of the Law. “The fact that these strikes are happening simultaneously shows that if the companies don’t meet their demands, workers have the power to shut down the supply chains.”

Dubal added: “Consumers, too, are realizing how their well-being is intertwined with the well-being of people who do these jobs.”

According to Amazon worker Christian Smalls, a process assistant at the Staten Island facility who led Monday’s organizing effort, “the plan is to cease all operations until the building is closed and sanitized.”

“We’re not asking for much,” he told CNN Business on Sunday, claiming many more employees have tested positive for the virus at the facility than the company has publicly acknowledged. At the protest, one person chanted, “How many cases we got?” and workers replied “Ten!” When asked whether the facility had 10 cases, Amazon would not confirm nor deny the number.

“We’re asking the building to be closed and sanitized, and for us to be paid [during that process],” said Smalls.

About 50 people walked out of the building in protest, according to New York Communities for Change, which was present at the action and streamed it live on Facebook. An Amazon spokesperson said just 15 people participated.

“The truth is the vast majority of employees continue to show up and do the heroic work of delivering for customers every day,” an Amazon spokesperson said in a statement. “Like all businesses grappling with the ongoing coronavirus pandemic, we are working hard to keep employees safe while serving communities and the most vulnerable.”

Hours before the walkout, some employees at the facility received a text message notifying them that another worker, last in the facility on March 24, tested positive for coronavirus, one worker told CNN Business. “We understand that you may be nervous about coming in to work,” the message read. “We have taken a number of measures to keep us safe, such as an increase in social distancing requirements to six feet, staggered shifts, extended breaks, and even more frequent cleanings.” Amazon confirmed the text is authentic.

Still, some workers are on the fence about joining the strikes. Despite wanting to push for change, some can’t afford to not work and feel conflicted about about its potential impact on regular households.

“People need to get their groceries and I don’t want to hinder that, it isn’t their fault,” a worker for Instacart in Florida, who spoke on the condition of anonymity for fear of retaliation, told CNN Business. “I delivered [Saturday] to a man whose wife has an autoimmune disorder and [needs] groceries delivered.”

Editor’s note — This story has been updated to reflect the source of the estimate of 50 people protesting at Amazon’s Staten Island facility and Amazon’s response to that estimate.