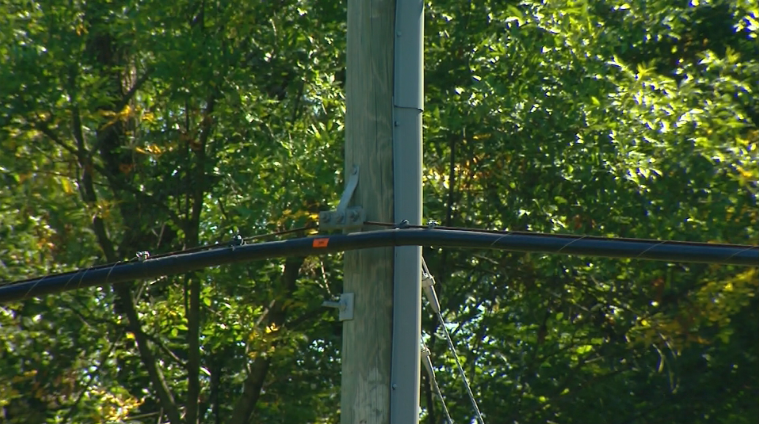 INDIANAPOLIS (WISH) — Copper thieves are stealing aerial AT&T wire from Indianapolis neighborhoods and police are asking the public for help finding those responsible.

Since August 15, the thieves have struck five times, all in the Decatur and Wayne Township areas in Southwest Indy.

The thieves are coming in the dead of night and dismantling AT&T wires for phone, cable, and internet.

Melissa Weddle depends on her AT&T Web connection for her job.

“I always get on the Internet at night when everyone’s sleeping and I can get more work done,” she said.

That’s why she was so frustrated a few weeks ago when the line went dead.

“For about two days straight we didn’t have internet, so I called AT&T,” Weddle said.

The company didn’t tell her the cause of the outage.

She was surprised to learn Thursday that it was caused by thieves stealing several hundred feet of AT&T wire down her block.

“We thought it was them working across the street but now I know that it wasn’t,” she said.

She said it’s concerning that someone could pull off a crime like that so close to her house.

“I didn’t think they’d be in our neighborhood. I mean, I haven’t had any problems before,” she said.

IMPD Detective Larry Craciunoiu said the police don’t have any suspects yet.

But he believes these criminals know what they’re doing and have large equipment to carry hundreds of pounds of cable away.

“We also believe they are using some sort of bucket truck almost like a utility truck to get somebody up to that area to cut the cable,” he said.

He said the equipment should make the operation obvious for neighbors to spot. Police say to let them know if residents see bucket trucks operating at odd times of the day.

“A legitimate crew will not be out between midnight and 4 to 5 in the morning,” Craciunoiu said.

Neighbor James Jenkins said he will start being more observant when crews are nearby.

“They’re always out working on the lines and we don’t know who’s who,” Jenkins said.

“We’ll keep an eye out on strange people or anything going on,” Weddle said.

But both are worried they wouldn’t be able to tell a legitimate crew from the criminals.

“If they can climb the poles we figure they’re legit,” Jenkins said.

If you live in the southwest part of Marion County, police ask you to please be on alert.

AT&T tells police this is the only place in the state right now it’s seeing this type of crime.

You can call Crimestoppers at 317-262 TIPS or the police department when you see a truck you think is suspicious.