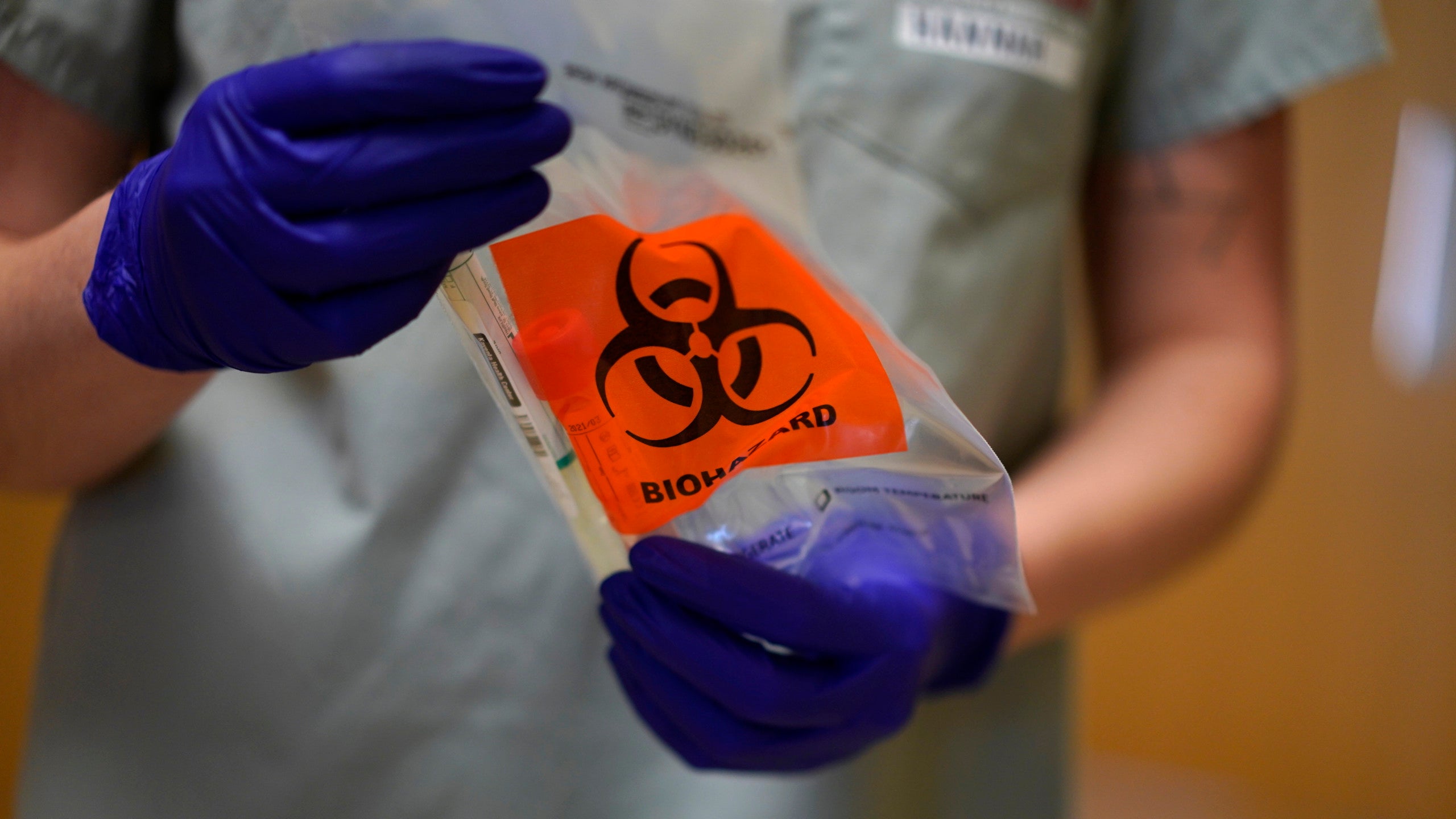 Team Rubicon volunteer, EMT Hannah Tellier, from Boston, holds a COVID-19 test in the emergency room of the Kayenta Health Center on the Navajo reservation in Kayenta, Ariz., on April 23, 2020. The Navajo reservation has some of the highest rates of coronavirus in the country. Team Rubicon is helping with medical operations as cases of COVID-19 surge. (AP Photo/Carolyn Kaster)
by: Arman Azad and Renee Baharaeen, CNN
Posted: May 22, 2020 / 10:05 PM EST / Updated: May 22, 2020 / 10:06 PM EST

(CNN) — The US Centers for Disease Control and Prevention acknowledged on Friday it had mixed together results from viral and antibody coronavirus tests on its website.

The CDC says it’s planning to separate those numbers in the coming weeks, but experts say the current method is unhelpful and potentially misleading.

That’s because antibody tests aren’t used to diagnose current infections or determine whether someone is potentially contagious. Instead, they indicate whether someone has been exposed to the virus in the past.

Combining numbers from antibody and viral tests pushes up the total number of tests conducted in the US. But antibody tests are often intended for the general public — not just people with suspected infections — so they can skew a key indicator of how the pandemic is progressing: the percentage of tests that come back positive.

The CDC’s method makes it appear that the US has greater capacity to test than it really does, at least when it comes to identifying current infections.

“It’s not useful information, unless you have a political agenda that you’re trying to back up. That’s really the only reason to do that,” said CNN medical analyst Dr. Celine Gounder, a professor of medicine and infectious diseases at the New York University School of Medicine.

“This is just one more example of why we’re very concerned that science is being suppressed at the CDC and is taking a back seat to political priorities in this administration,” she said.

Whether the combined numbers are coming from states and being republished by CDC — or whether the CDC is misconstruing the numbers itself — Gounder said the data are concerning. The numbers can make it seem like states have enough testing capacity and are ready to lift restrictions, when that might not be the case.

“This is pretty basic molecular biology 101 that any college student who has studied this stuff would have some basic understanding of,” she said. “So CDC epidemiologists know this.”

News of the agency combining viral and antibody tests was first reported by Miami-based public radio station WLRN and in the Atlantic magazine.

CDC spokeswoman Kristen Nordlund described the agency’s practice to CNN on Thursday and confirmed it the next day.

“Initially, when CDC launched its website and its laboratory test reporting, viral testing (tests for current infection) were far more commonly used nationwide than serology testing (tests for past infection),” she said in an email. “Now that serology testing is more widely available, CDC is working to differentiate those tests from the viral tests and will report this information, differentiated by test type, publicly on our COVID Data Tracker website in the coming weeks.”

Viral tests, or diagnostic tests, are able to identify current infections. Often called PCR or antigen tests, they look for signs of active infection. A positive test result means someone is potentially contagious — although some tests have accuracy problems.

Antibody tests, in contrast, identify whether someone has been infected by the virus in the past, not whether they’re currently infected. As the CDC states on its website: “Antibody tests should not be used to diagnose someone as being currently sick with COVID-19.”

Currently, the CDC says that about 12.9 million tests have been reported in the US, although it cautions that not all tests are reported to the agency. Still, data from independent labs suggests that a substantial number of tests conducted in the US are antibody tests.

Quest Diagnostics said on Monday that it had performed about 1 million antibody tests. LabCorp, another clinical laboratory, said it has performed more than 700,000 as of Friday.

Both companies say they have far greater capacity to perform antibody tests than viral tests.

The difference between the tests matters, because the percent of tests that come back positive — the so-called positivity rate — is a critical indicator for whether states are ready to reopen. It’s a sign of the progress that the country is, or isn’t, making on the virus — and antibody tests can complicate the picture.

The White House’s own reopening guidelines, for example, call for a “[downward] trajectory of positive tests as a percent of total tests within a 14-day period (flat or increasing volume of tests).”

While antibody tests are useful for understanding how prevalent the virus has been — and whether people might have some sort of immunity in the future — they don’t reflect the current state of the pandemic.

“Many states are using numbers of diagnostic tests per capita and the proportion of positive test results as key metrics for reopening decisions, so adding a whole bunch of other tests that do not measure the present state of the pandemic to the mix is unhelpful and creates confusion,” Bill Hanage, an epidemiology professor at Harvard University’s School of Public Health, told CNN.

“Fortunately, most, though not all, states are reporting these results separately, which is the data that should be used when making decisions about reopening,” he said.

Some states acknowledge mixing together the numbers

Contacted by CNN, public health officials in most states said they haven’t combined numbers from antibody and diagnostic tests. But 11 states reported mixing the numbers together at some point.

Colorado, Delaware, Georgia, Maine, Mississippi, Missouri, New Hampshire, Pennsylvania, Texas, Vermont and Virginia have all done so, but some states have stopped the practice.

Officials in Virginia and Vermont said they’ve fixed the issue. New Hampshire said it only reported the combined numbers for a day, and Colorado said it did so for about a week. Maine now separates out its numbers as well.

Texas said it will be separating the numbers this week, and Georgia says it’s working to provide greater transparency. Of the 50 states and the District of Columbia, CNN has not yet received responses from Alaska, Arizona, Florida, Iowa, and Kentucky.