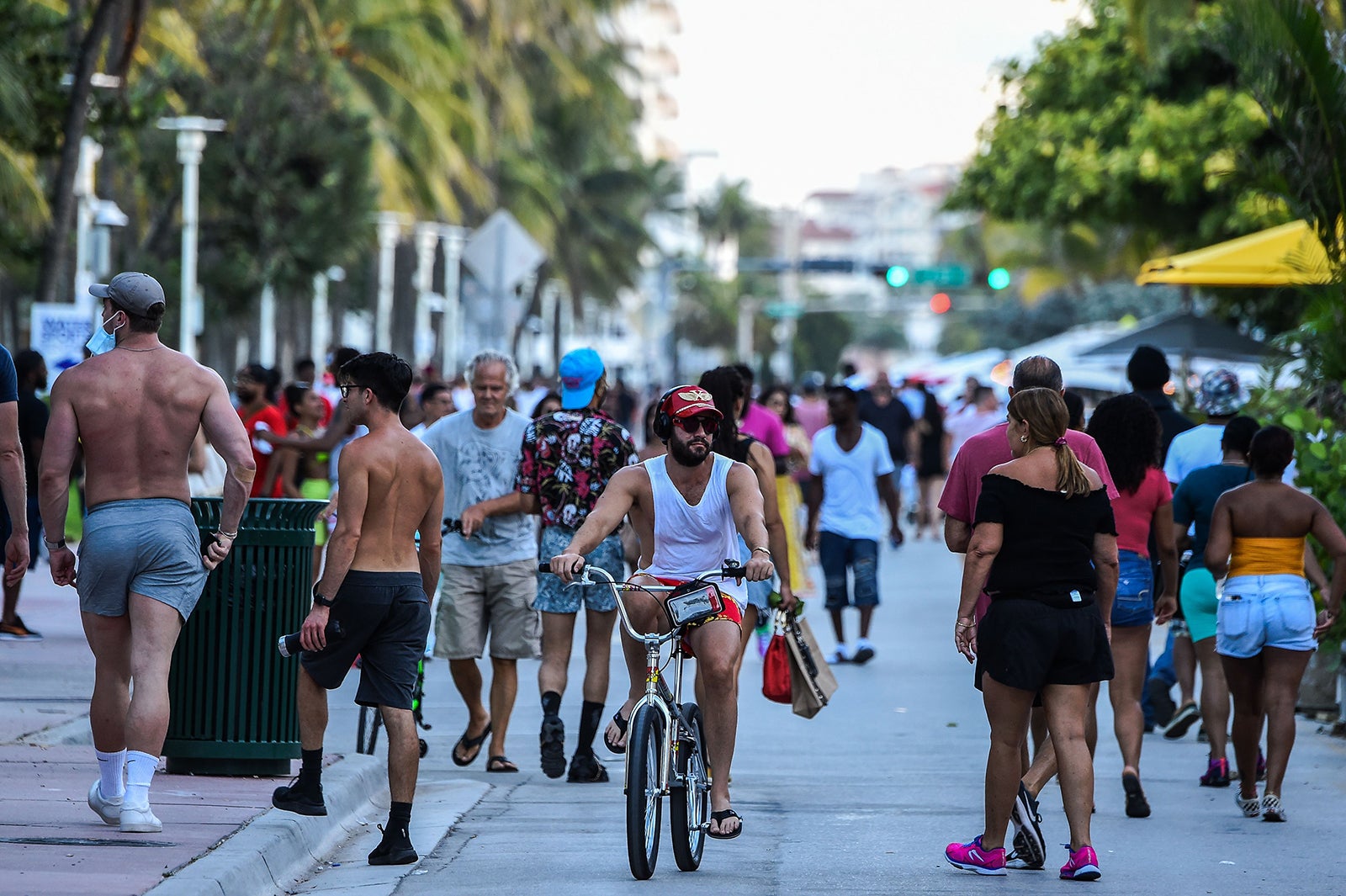 A man rides a bicycle as people walk on Ocean Drive in Miami Beach, Florida on June 26, 2020. - They are itching for a good time after months of lockdown, and may the coronavirus be damned: young adults in Florida are fueling a dangerous rise in COVID-19 infections. Feeling immortal, these fun-crazed people are finding ways to gather and party even though many bars and nightclubs remain closed as the Sunshine State reopened its economy this month. (Photo by CHANDAN KHANNA / AFP) (Photo by CHANDAN KHANNA/AFP via Getty Images)
by: Christina Maxouris and Eliott C. McLaughlin, CNN
Posted: Jun 28, 2020 / 01:06 PM EST / Updated: Jun 28, 2020 / 04:47 PM EST

A rise was reported in a staggering 36 states, including Florida, which some experts have cautioned could be the next epicenter for infections. Officials there and across the U.S. are also warning of an increase in cases among younger people.

Florida reported 9,585 new coronavirus cases Saturday, a single-day record since the start of the pandemic. The number rivals those of New York’s peak in early April (New York’s new case tally Saturday was about 6% of Florida’s). On Sunday, Florida’s Department of Health reported another 8,530 new cases.

Florida Gov. Ron DeSantis said the state’s surge in cases in the past week was the result of a “test dump,” echoing an assertion from the White House that an increase in testing is resulting in the higher numbers.

The head of the U.S. Centers for Disease Control and Prevention contended the increase was actual, not an anomaly related to testing numbers, and warned more spread and deaths were in the country’s future.

“As a doctor, a scientist, an epidemiologist, I can tell you with 100% certainty that in most states where you’re seeing an increase, it is a real increase. It is not more tests; it is more spread of the virus,” CDC Director Tom Frieden told Fox News on Sunday.

In the South, the numbers are rising as a result of hasty reopenings, he said, and it’s “going to continue to get worse for weeks.” Deaths are not yet spiking because deaths lag infections by about a month, he said, estimating the nation will see at least 15,000 more deaths in the next month.

This all came as the United States broke another record, reporting the highest number of new cases in a single day Friday with at least 40,173 new infections.

The daunting numbers could be “a tip of the iceberg,” Frieden said. A CDC survey suggests the total number of coronavirus infections across the U.S. could actually be six to 24 times greater than reported.

As cases spike, U.S. travelers are “unlikely” to be allowed into the European Union as the bloc begins opening up to international travel, several EU diplomats told CNN.

Officials in parts of the U.S. are now trying to reel in the spread of the virus — which many experts have said is spiraling out of control — by making pleas to the country’s young population to keep their distance, urging the use of face masks and halting their reopening plans.

The U.S. has now hit more than 2.5 million infections and at least 125,539 deaths, according to Johns Hopkins University.

Where new cases are on the rise

New York on Sunday boasted its fewest deaths — five — since March 15, and hospitalizations were below 900.

About 1% of the tests conducted in the state Saturday were positive, resulting in 616 new cases in 43 counties, according to a news release from Gov. Andrew Cuomo’s office.

At least 12 states halted or rolled back their reopening plans in hopes of curbing the spread of the virus.

Washington Gov. Jay Inslee announced Saturday he’s hitting the pause button on the state’s reopening plan due to rising cases. Some counties were preparing to enter the fourth phase of reopening, “which would essentially mean no restrictions,” the governor’s office said in a statement.

“Phase 4 would mean a return to normal activity, and we can’t do that now,” the statement said. “This is an evolving situation and we will continue to make decisions based on the data.”

These are the states that require face masks

“I ask all Texans to do their part to slow the spread of COVID-19 by wearing a mask, washing their hands regularly, and socially distancing from others. The more that we all follow these guidelines, the safer our state will be and the more we can open up Texas for business.”

Arizona’s governor has also announced that the state’s reopening is on pause as a result of a major spike in cases.

“We expect that our numbers will be worse next week and the week following,” Gov. Doug Ducey said.

In recent days, officials across the U.S. have reported a rise in cases among younger groups. In Mississippi, officials pointed to fraternity parties as one of the drivers behind the state’s cases.

“There is a sense that a lot of young people, well you’re young so you feel a little bit more invincible but, respectfully, often that can be a selfish mindset,” Newsom said.

In Florida, Gov. DeSantis said while the median age for those infected with the virus in March was in the 60s, in the past two to three weeks it’s dropped to people in their early 30s.

The governor urged younger groups to be vigilant, saying while they may not be at risk for serious complications, they can pass the virus on to someone who is. The state’s community transmission, he said, is “being driven by that 18 to 35-year-old group.”

“You have a responsibility to be careful if you’re in contact with somebody who is more vulnerable,” he said. “We’ve been stressing avoiding the three Cs which are: closed spaces with poor ventilation, crowded places with many people nearby and close-contact settings, such as close-range conversations.”

In addition to potentially spreading the virus to older people and those with compromised immune systems, family physician Dr. Jen Caudle said, young people face their own risks and it’s important they not consider it “a walk in the park.” She’s had young patients suffer strokes, and others who’ve experienced shortness of breath, fatigue or loss of smell and taste long after their recovery, she said.

“Just because young people tend to fare better doesn’t mean that they always do,” she said. “It’s really important that we wear our masks, that we social distance. Especially in places where COVID is increasing, it’s honestly best to stay home.”