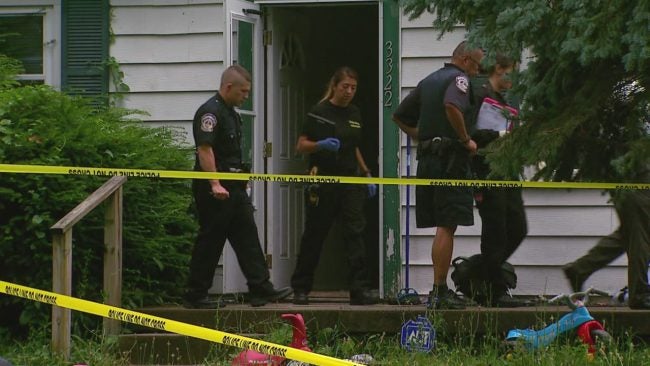 INDIANAPOLIS (WISH) – An Indianapolis woman is pleading for the truth after witnesses told police her son died in an accidental shooting. They said he shot himself while playing with a gun.

The Marion County Coroner’s Office ruled the 15-year-old boy’s death a homicide Thursday. The coroner’s office said he died from a gunshot wound to the head.

Kaiyana Rockingham told 24-Hour News 8 she saw her son in the hospital and believes there’s more to what happened.

“The first thing I said was no not Dewaun he didn’t do this. He didn’t do that,” she said. “So it took for me to go to the hospital and see his face and see the wound in his head to know that he didn’t do it.”

She said her son Dewaun Rockingham was the light of her life.

“He was the light when he’s around. He lights up the room,” she said. “He can bring laughter and love anywhere he goes.”

Rockingham and other close family and friends spent Thursday night selling food in the parking lot of a church.

They’re trying to raise money to help pay for his funeral this weekend.

The shooting happened inside of a home near Wallace and 33rd Street on June 22.

Rockingham said her son spent the night at a friend’s house when she received a phone call.

“He was actually supposed to come home on Wednesday,” she said. “I was supposed to pick him up after I got off from work. I didn’t even make it to work before they were calling me and telling me that this incident had happened.”

Witnesses told police the shooting was accidental and that the 15-year-old shot himself while playing with a gun.

“I deserve the truth Dewaun deserves the truth to be told,” she said. “He didn’t deserve for somebody to say he did this to himself when you know that he didn’t.”

Rockingham said her son had just graduated from middle school. He loved to camp and had dreams of becoming a basketball player. Rockingham said she can’t help but to feel a sense of regret.

saying no you can’t stay, no its time to come home.”

A spokesperson for IMPD told 24-Hour News 8 in an email the shooting appears to be accidental.

Detectives are still waiting for a couple of things to be tested before presenting the case to the prosecutor’s office.