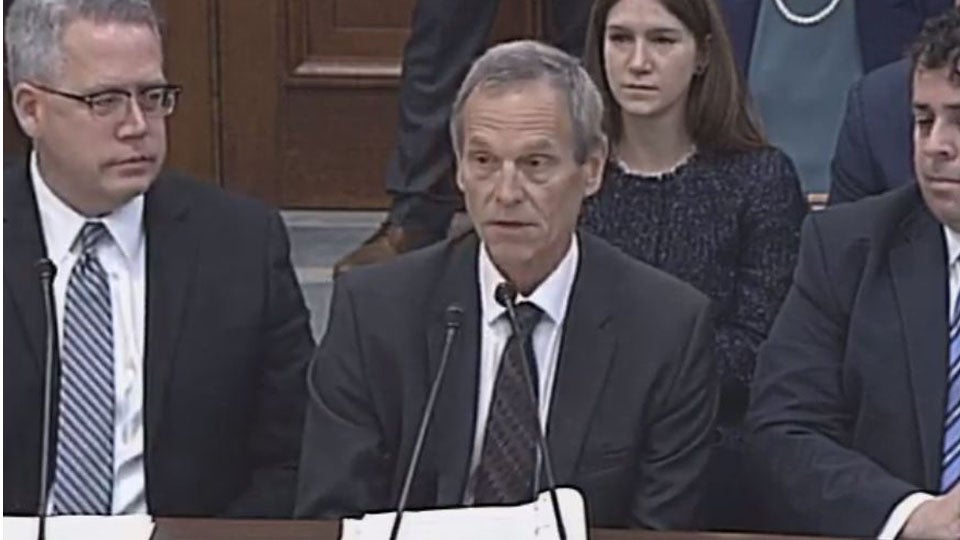 COLUMBUS, Ind. (Inside INdiana Business) — The lack of a cohesive national policy on climate protection and vehicle emissions will stymie research and development efforts of manufacturing companies like Columbus-based Cummins Inc. (NYSE: CMI), according to Cummins Vice President of Global Research and Technology Wayne Eckerle.

Eckerle was one of seven witnesses who testified on Capitol Hill before the House Subcommittee on Environment and Climate Change. Wednesday’s hearing focused on the decarbonization of heavy-duty trucks, ships, aircraft, and rail and its impact on the nation’s economy.

In July, the House Committee on Energy and Commerce announced that it had adopted a goal for the U.S. to achieve a 100 percent clean economy with zero greenhouse gas pollution by 2050. Wednesday’s hearing was part of the bill-writing process.

“We commend the Committee’s commitment to facilitate the transition of the U.S. economy to net-zero greenhouse gas pollution by 2050,” said Eckerle in his prepared statement to the subcommittee. But he cautioned “to deliver on our promise of powering a more prosperous world, both economic growth and environmental sustainability must be achieved. “

Eckerle says laws and regulations must enable the power of choice, recognizing that there is not a one-size-fits-all solution for every challenge. He says a patchwork of policies can be cost-prohibitive for a company, like Cummins, to invest in research and development of new, cleaner technologies.

“As we get into 2024, it looks like we’ll have a regulation in California that will be different than the other 49 states. So, now we have to spread our R & D (research and development) dollars over a much bigger technology range. Which makes it really difficult,” says Eckerle.

The 100-year-old company was built on the success of its diesel engines, but in recent years Cummins has developed a broad range of powertrain products designed to operate on clean diesel, natural gas, battery-powered electricity, and hydrogen fuel cells.

“This growing energy diversity in our product line and the inevitable transition to decarbonized primary energy sources that are renewable, carbon-free, or carbon-neutral will enable our products to be an integral part of addressing climate change,” said Eckerle.

He says Cummins has expanded its technical capability with battery-electric technology for school bus, transit bus and truck applications, but he says Class 8 trucks, the largest semi-trucks on the road, is an example that is not a candidate to go pure electric.

“Because the battery would just weigh too much. So that’s a place where an internal combustion engine running on a carbon-neutral fuel would be a great application” says Eckerle.

Eckerle says he appreciates the opportunity to guide lawmakers as they write a climate-focused law, but at the end of the day, he says Cummins must deliver a product that customers are willing to buy.

“We just got a long way to go to make it cost-competitive and something that a set of customers will really want.”