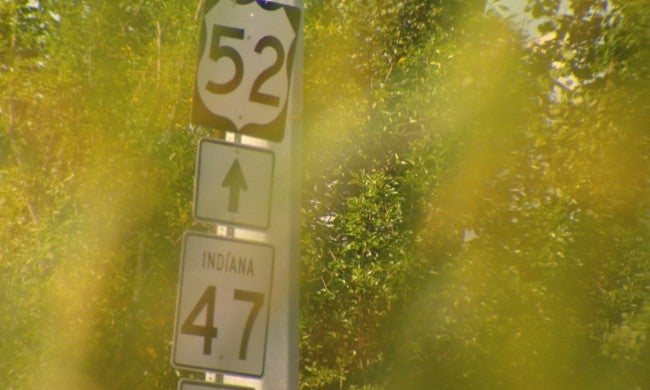 THORNTOWN, Ind. (WISH) – Law enforcement are taking matters into their own hands to make sure drivers and hundreds of young passengers are safe as they pass through a dangerous intersection.

The shutdown of Wildcat Creek Bridge along Interstate 65 is forcing traffic to detour on U.S. 52. The danger picks up when it intersects State Road 47 in Thorntown.

Boone County Sheriff Mike Nielsen said in the 30 days before I-65 was closed, there weren’t any crashes at intersection. Since the shutdown he said there’s been seven.

“Very scary,” described Laura Redman. She works at the Dairy Queen right next to the intersection and has watched it transition from busy to risky thanks to a rush of traffic from the I-65 shutdown. The speed limit along U.S. 52 in that area was reduced from 55 miles per hour to 45 miles per hour, but she said drivers don’t slow down.

One time she witnessed a crash.

“One pulled out, didn’t see other and smacked right into them,” she said.

Our crew nearly saw a wreck when a driver heading south of U.S. 52 blared the horn as a northbound driver daringly turned onto S.R. 47.

Dr. Judi Hendrix, superintendent for the Western Boone School Corporation, said just watching the traffic made her nervous. It only got worse when the school year started this week. She said up to 300 students who ride the bus pass through the intersection.

“We all came together and said what can we do to make it safe for our buses,” she said about her conversation with local law enforcement.

Since there’s no stop light, they’re using police lights. Sheriff’s deputies and Thorntown Police shut down the intersection twice a day and escort school buses across.

“When you have the traffic, for a bus to set in the middle section waiting to cross the other side, we just couldn’t do that,” said Dr. Hendrix.

“They pull up to the edge of the road and they stop for the buses to go through,” described Thorntown Elementary School student J.D. Albertson.

That was his view from his seat on the bus, one that had his mother Holly feeling thankful.

“I thought, ‘awesome.’ I was a little worried about it you know before (the escort), wondering how they were going to get all the school buses across. So I was happy,” she said.

The buses also stopped picking up students who live along U.S. 52. Instead, parents must take their kids to school or drop them off at a location where buses still stop.

“(Parents) were all very cooperative. Obviously if they live on 52 they wouldn’t want their child being picked up anyway in this amount of traffic,” she said.

Those ideas are only temporary fixes, but the school corporation and law enforcement want something that’s permanent. They asked the Indiana Department of Transportation to put a stop light at the intersection.

“The traffic can’t go away. Obviously they have to fix the bridge, but anything they can do for our safety would be greatly appreciated,” said Dr. Hendrix. “Not just by me or our school but this whole community. Many people use this area and just for their safety.”

“That would be great,” said Holly, who lives right next to the intersection and even goes out of her way to avoid it now.

We asked INDOT about the concerns. A representative told us they are monitoring the intersection but there’s no timetable on when a change like a stop light could happen.