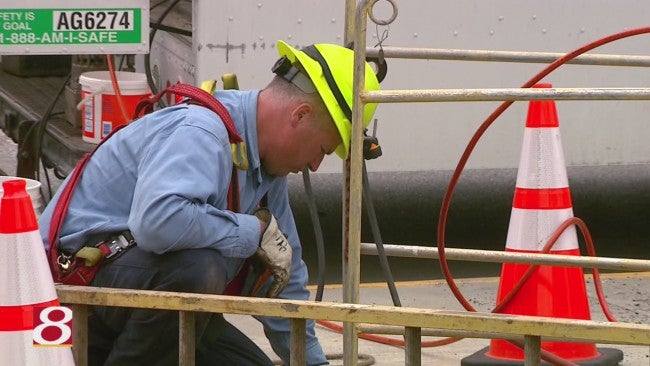 INDIANAPOLIS (WISH) — Indianapolis Power & Light said Thursday that its downtown network is “safe and reliable” when compared to other cities. I-Team 8 did some underground digging to investigate the comparisons more closely.

The underground explosion that rocked Capitol Avenue near North Street Thursday sent at least two manholes shooting into the air. Two more manholes were dislodged in a nearby alley. The blast has also left hundreds without power, which may take several days to restore, IPL said late Thursday.

The explosions are at least the 15th such blasts in IPL’s downtown network during the last 10 years.

Despite those numbers, IPL insisted Thursday that its grid is not headed toward a state of failure.A GROWING PROBLEM

“It is a very safe and reliable network, especially when you put it into the context with other downtown networks in other cities,” said IPL President and CEO Kelly Huntington.

“If you look at other metropolitan areas like New York, like San Francisco, like Chicago, you’ll see that they have problems,” echoed IPL Vice President for Consumer Operations Joe Bentley.

A simple Google search proves Indianapolis is not alone in battling underground explosions.

For example, as heavy snowfall descended on Brooklyn early last month, a television news crew covering one underground explosion caught a second one on tape just feet away. It sent a manhole cover flying 40 feet into the air, which then hit an elderly man, sending him to the hospital.

It was, by electric utility Consolidated Edison’s own admission, at least the 200th such explosion reported in New York City in just 48 hours.

But, how much of a contributor?

While there’s no shortage of recent media reports on underground electric grid explosions in cold weather cities like Detroit, Chicago and Portland, Maine, they appear right alongside reports from warm weather cities like San Francisco and Los Angeles.

“If you don’t maintain anything, your car, or whatever it may be, something’s going to break on you at some point,” said Sheets, Vice President at Indianapolis based Barth Electric.

Barth specializes in large scale electrical construction, including the installation and maintenance of many large downtown buildings, including Lucas Oil Stadium.

“It’s not a single event type thing,” Sheets said. “I wouldn’t say the corrosion that’s happened this winter has created the problem. But, winter after winter, long term, it’s ate on that system. And, this may have been the breaking point this year.”

Couple that corrosion with the aging infrastructure under Indianapolis’ streets-particularly high voltage cables, like the one that shorted out Thursday–and you’re sitting on a ticking clock, Sheets said.

“You need to start looking at 30 years on doing your maintenance on them,” Sheets said. “Some of those cables can last 50 years. But, much past that, and you’re probably needing to do some replacements.”

It’s still unclear how old the cable that failed Thursday was, but Sheets said it wouldn’t be uncommon to find some equipment in IPL’s underground network that dated back to the 1950’s.

“I know they have a maintenance program,” Sheets said. “But, their system is huge. I don’t know if they’ve got enough people looking at everything. That’s something you probably need to ask them.”POLICING THEMSELVES

Utility watchdogs maintain that asking the utility to report how its system is being inspected and maintained is part of the problem.

“This incident is emblematic of what we’ve created in Indiana. And, that’s an environment where utilities are self-regulating themselves. This is a situation where, not only the Indiana Utility Regulatory Commission, but the Indiana General Assembly should hire an outside, third party analyst and investigator to conduct an investigation, absent whatever IPL may do themselves,” said Citizens Action Coalition Executive Director Kerwin Olson.

CAC serves as a consumer advocate in utility rate and safety cases.

“Sure, these things have happened in other states, other cities,” Olson acknowledged. “But, utilities there have been fined. They’ve been threatened with losing their franchises if they don’t get their act together. Here, we do little else than ask the utility company what they’re going to do about it and hope that they fix it.”

That’s something the IURC hasn’t done.

“We have a situation in Indiana where the Commission does not even have the authority to fine the utilities for negligence or (for) other incidents such as this. We have a legislative environment and regulatory environment that does little more than protect utility earnings and revenues. And, that doesn’t help protect public (safety),” he said.

But, Sheets, the engineer, cautions: even additional oversight isn’t foolproof.

“There is no magic bullet. There’s no way anyone could catch every instance. I do think the higher you raise your level, the less instances you’re going to have. But, even if you increase your maintenance and add maintenance crews, you still have to say: this is the level we want to be at. This is an acceptable failure rate, and you go from there,” Sheets said.

Olson, however, said he doesn’t believe that approach will yield results.

“That’s not good enough,” he said. “The regulations here are too lax. They’re very inadequate. Fortunately no one’s been hurt, injured or killed. But, this is a serious concern and the public should be worried.”NEW INVESTIGATIONS

CAC’s call for an independent investigation into IPL’s underground network would include a thorough review of inspection and maintenance records, with recommendations on system improvements.

I-Team 8 requested inspection records on the underground vault that failed Thursday. Bentley said early Thursday that IPL said is “still in the process of gathering the information.”

The IURC will likely press for that information during an emergency meeting scheduled for Friday morning to discuss Thursday’s explosion.

The Commission is also charged with approving or denying IPL’s recent request for a rate hike, and some expect the utility to argue it needs more money to help mitigate future problems in the downtown area.

Olson believes the jury is still out on the validity of that argument.

“We don’t know yet,” he said. “We have to look at their books in this rate case to see where they’re spending their money. Are they investing in their infrastructure? We don’t know, because we’ve allowed IPL to stay out of the regulatory commission for over two decades. We’ll start to see that information finally revealed soon. And, I suspect there will be a lot more questions ahead.”

IPS Board Meetings / 39 mins ago