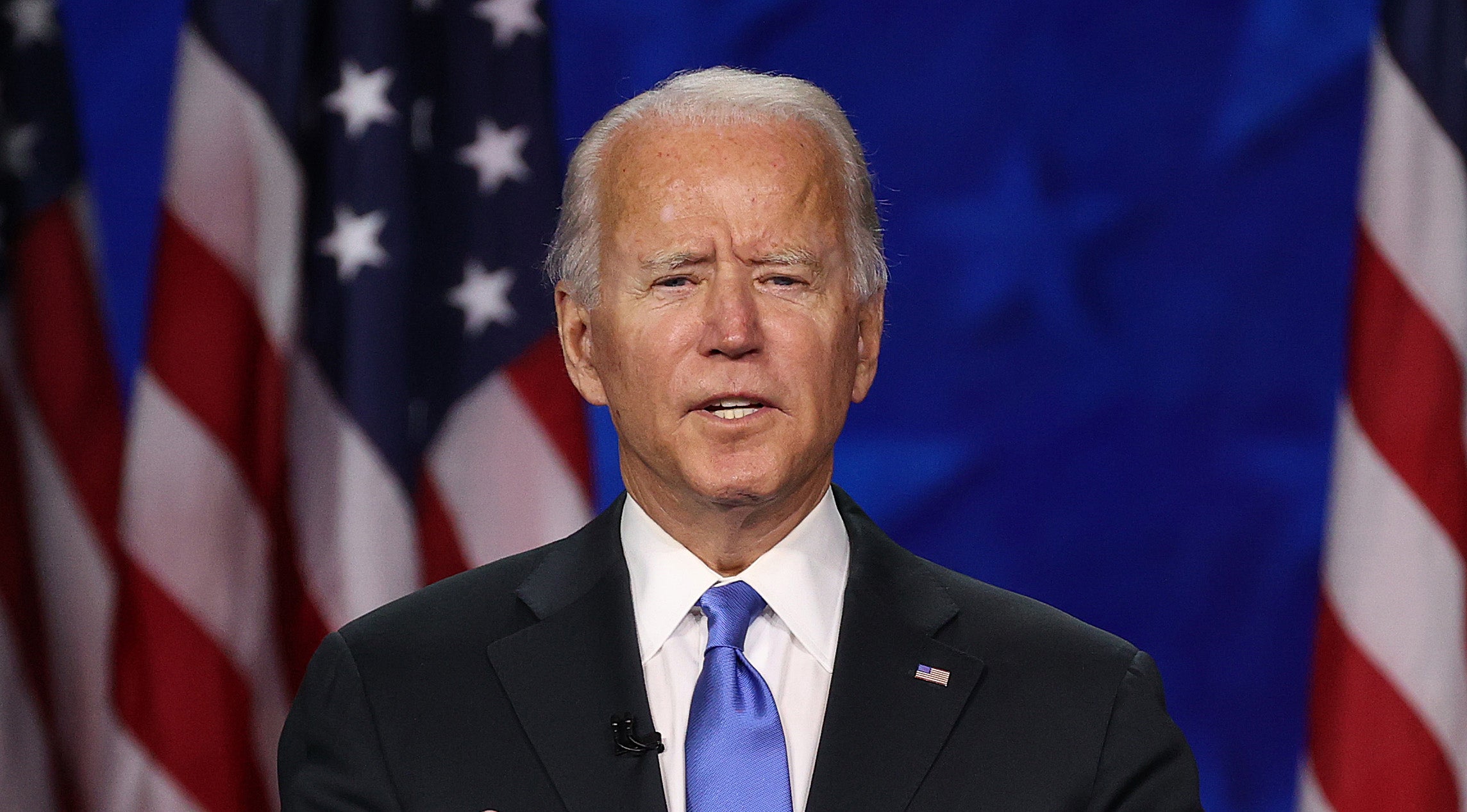 (CNN) — Joe Biden took the stage on Thursday for the most important speech of his 50 years in politics, hoping to convince frustrated voters that he would be a more caring, competent and thoughtful president than Donald Trump.

As he officially accepted the nomination of his party during the last night of the Democratic National Convention, Biden focused on the central message of his campaign — that he was running to reclaim the country’s character.

Biden led off his address lamenting the amount of anger and fear in today’s America, and said it was time to “choose hope over fear, facts over fiction, fairness over privilege.”

He noted that politicians often argue that each election is the most important. But, he said: “We know in our bones, this one is more consequential.”

While the night as a whole focused more on Biden’s life and political career, the former vice president laced into Trump for not having a plan to fight back against the coronavirus, arguing that the President has taken no responsibility for his decisions.

The speech marked the high point of a decorated career in politics that has seen the Scranton, Pennsylvania, native rise to the highest levels of government despite a lifetime of family tragedy. Biden had run for president twice before, never going far in those runs and the third try seemed destined to end the same way until a turning point win in South Carolina in late February.

The former vice president then swept through the Super Tuesday states and romped to the nomination, culminating in a four-day virtual celebration that aimed to promote him as an empathetic leader who would be guided by science as the nation faces its greatest crisis in generations.

Biden said the first steps he would take in office would be aimed at getting control of the virus.

“It didn’t have to be this bad,” Biden said of the pandemic, noting that the President “keeps waiting for a miracle.”

The final night of the convention featured average Americans whose lives have been touched by the former vice president, from military families to 13-year-old Brayden Harrington, who approached Biden in New Hampshire asking him to help coach him through overcoming his stutter, as Biden did in his own youth by reciting poetry in the mirror and later by marking his speeches as a reminder not to rush through his remarks.

The evening opened with a series of videos giving testimony to Biden’s humanity. One woman, Amanda Litman — executive director of Run For Something, a progressive organization — told how the former vice president consoled her family when a close relative was gravely ill with colon cancer.

She then used the experience to suggest how Biden could bring such empathy to bear in a nation in the grip of a pandemic that has already killed more than 170,000 people.

“Our entire country is grieving. We are all going through trauma. Our next President needs to be the one helping us heal,” she said.

In what was a deeply poignant moment, Biden’s three children gave the introduction to his keynote speech in a video. The former vice president’s son Beau, who died of brain cancer five years ago at the age of 46, was portrayed in video clips from previous speeches about his father.

Biden strongly pushed for such an introduction, which also featured his son Hunter and daughter Ashley. The former vice president decided after much soul searching not to pursue a presidential campaign in 2016, saying the window for a run had closed while he was mourning Beau.

“Take it away, Beau,” Ashley Biden said, as the video cut to Beau Biden giving a speech about his father at a previous convention.

Hunter Biden’s notable appearance is likely to ignite a storm among Republicans, since he was a central figure in claims by Trump and the conservative media of corruption when he was on the board of the Ukrainian energy company Burisma while his father was vice president.

Hunter Biden told ABC News last year that his role represented “poor judgment” but that he didn’t do anything improper. There is no evidence of any corruption by Biden and his son in Ukraine, and defenders argue that the controversy was cooked up by Trump’s defenders to distract from the President’s attempt to coax the Kiev government into interfering in the election to damage Biden in a scheme that led to Trump’s impeachment.

The tributes to Biden from current and former members of the military included speeches from former South Bend, Indiana, Mayor Pete Buttigieg, who ran against the former Delaware senator for the 2020 presidential nomination, and Illinois Sen. Tammy Duckworth, an Iraq War veteran and Purple Heart recipient who Biden considered during his vice presidential selection process.

Duckworth spoke about the qualities needed in a commander in chief and the attention they must pay to the needs of military spouses, noting how her own husband rushed to the hospital to take care of her after she was injured when a rocket-propelled grenade tore through the helicopter she had been flying over Iraq in 2004.

“Military service doesn’t just take courage and sacrifice from those in uniform — they’re required from their families, too,” Duckworth said. “Joe Biden understands those sacrifices, because he has made them himself. When his son Beau enlisted in the Army and deployed to Iraq, that burden was shouldered by his family as well.”

She said US service members deserve a leader who would “actually honor their sacrifices” and that they don’t have that in their current commander in chief, because Trump “is either unwilling or incapable of doing so.”

When Buttigieg, a Rhodes scholar who was a lieutenant in the US Navy Reserves, endorsed Biden earlier this year, the former vice president took the microphone to invoke his late son, an Iraq War veteran who Biden refers to as his “soul.”

“I don’t think I’ve ever done this before, but he reminds me of my son, Beau,” Biden said, with Buttigieg looking on. “I know that may not mean much to most people, but to me, it’s the highest compliment I can give any man or woman.”

On Thursday night, Buttigieg also spoke about his military service and his experience as a gay man in America watching how the country has shifted on LGBTQ rights.

“Joe Biden is right: this is a contest for the soul of the nation. And to me, that contest is not between good Americans and evil Americans. It’s the struggle to call out what is good in every American,” Buttigieg said.

“It’s up to us. Will America be a place where faith is about healing and not exclusion? Can we become a country that lives up to the truth that Black lives matter? Will we handle questions of science and medicine by turning to scientists and doctors? Will we see to it that no one who works full time can live in poverty?” he said. “I trust Joe Biden and Kamala Harris to guide us toward that better future, because I have seen — up close — their empathy, and their capacity — just as I’ve seen America’s capacity to move toward inclusion.”