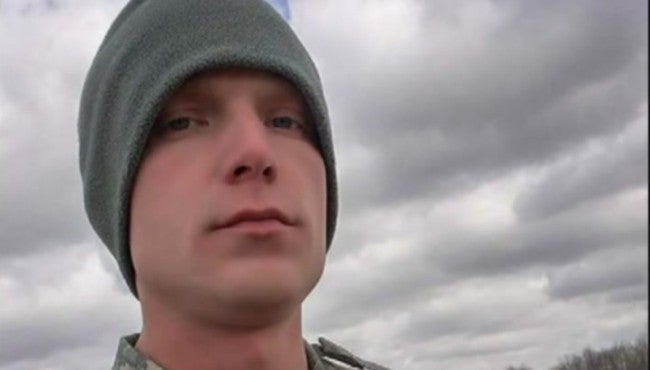 INDIANAPOLIS (WISH) — Funeral services will be this weekend for an Army National Guard veteran killed in a hit-and-run crash on the southeast side of Indianapolis.

Sgt. Joseph Nordstrom died Saturday and will be laid to rest at 10 a.m. Saturday at Flanner Buchanan-Decatur Township on Kentucky Avenue. A viewing will take place from 2 to 8 p.m. Friday.

Police said they are still looking for a Ford pickup truck with damage to the front passenger side and headlight.

Nordstrom, 30, was walking with his girlfriend early Saturday morning when they were hit by a truck. His family members told 24-Hour News 8 they are pleading for the driver responsible to come forward.

James McCoy said his younger brother didn’t have a chance.

“They left him there in the middle of the road at 3:30 in the morning in pouring rain, 35 degrees. There was no one around,” he said.

A memorial on Southeastern Avenue on Tuesday marked a painful reminder for McCoy and his family.

Nordstrom was hit by a truck and declared brain dead at the hospital. His girlfriend was also taken to the hospital for her injuries. Police said she was in stable condition Tuesday.

McCoy said his brother is survived by a 2-year-old son, and loved his country and the military.

He was an 11-year veteran of the Army National Guard and served one year in Afghanistan as a generator mechanic.

“People that he works with said that he was actually, he was on the list to get deployed this year. So, he was getting ready to go back over there sometime this year,” he said.

But that day will never come.

“That’s why we’re begging Hoosiers for help,” said Renee Smith, who is engaged to Nordstrom’s brother.

Family members said police don’t have a lot of information to work with. They only have a description of a truck leaving the scene. It’s described as a Arizona beige or gold, possibly 2004 to 2008 Ford F-150.

McCoy said he does not understand how someone can do this to another person.

“Just to do something like that to someone. I mean, I just say if it was them, would you want someone to do that to your family member?” McCoy said.

McCoy said his family wants to find the Uber driver who cared enough to stop and check on his brother and his girlfriend after the crash. They just want to meet and thank that driver.

If you have any information that could help police with the investigation, you can call Crime Stoppers of Central Indiana at 317-262-8477.