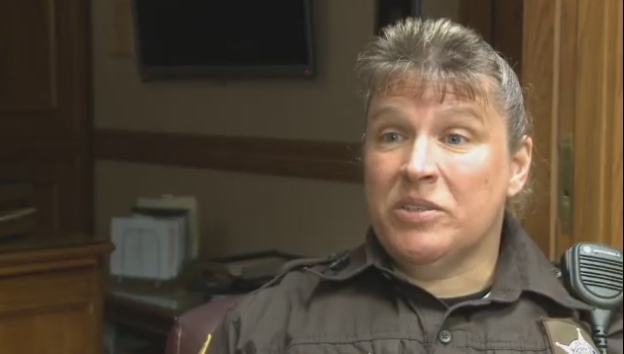 FORT WAYNE, Ind. (WANE) – It’s been just over a week since a fatal crash killed two sisters and hurt two more. The family wants to thank all of the first responders and medical professionals who have assisted them since that time, including Sgt. Michele Halsey.

“She was at the hospital and you know the picture of an officer with a bulletproof vest and a 9 mm on her belt kneeling in front of these parents and grieving with them, holding their hands… made me realize that while some people may have had bad experiences with officers in our day, there’s still a lot of compassionate, loving and caring officers on the police force,” the victims’ uncle, Soloman Graber, said.

That’s how the Schmucker family describes Sgt. Halsey- going above and beyond the call of duty on a day full of tragedy. After 23 years on the force, it’s days like that Halsey said she’ll never get used to.

“It’s hard to do the job, but everybody’s human. We have to believe that there is greater good,” Halsey said.

Halsey was heading to the crash at State Road 101 and Campbell Road when she got the call to first go to the family’s house.

“With the vehicle overturning, plus people were ejected, they didn’t know how many people might be in the van,” Halsey said.

Lydia, 11, and  Lisa, 13, died at the scene. Sarah, 8, is still in critical condition at Riley Hospital in Indianapolis. The driver, 20-year-old Lori, broke several bones, but is expected to recover.

“I pulled in the driveway and mom was coming out on the phone already. She knew there was an accident. I don’t know if she knew her daughters were involved,” Halsey said.

Halsey took the girls’ mother to the hospital and stayed with the family for several hours.

“It’s not an easy thing. Everybody is human. I have children. You do not want to tell a parent that their child has passed away. You’re supposed to outlive your children, not bury them before you,” Halsey said.

Halsey said she’s seen hundreds of crashes since becoming an officer but nothing of this magnitude.

“It’s always going to be there. You just have to continue to do your job. There will be something else that will eventually take its place, but it will always be there,” Halsey said.

The family’s strength is also unlike anything she’s ever witnessed.

“Listening to them and their faith when I was at the hospital with them, I think that’s what made me feel a little better because they knew that the children were in God’s hands now and it must have been his will or their time. They have taught me that even though it’s a tragedy, they still had the faith to believe on everything else that went on that day,” Halsey said. “They all came together as one to be in this tragedy to help each other heal.”

Through this experience, Halsey said she hopes people see what the majority of law enforcement is all about.

Halsey also said the Sheriff’s Department had a debriefing session the day after the crash.

“To get our feelings out there, to see if anything bothered us, what we could do to help the situation and stuff like that, so anything tragic like this, they’re there to support,” Halsey said.

The girls’ cousins have set up a Go Fund Me account to help with medical expenses. Family members expect the medical costs to exceed their insurance provider’s cap it’ll pay by possibly several hundreds of thousands of dollars. If you’d like to help, visit their Go Fund Me account to donate.