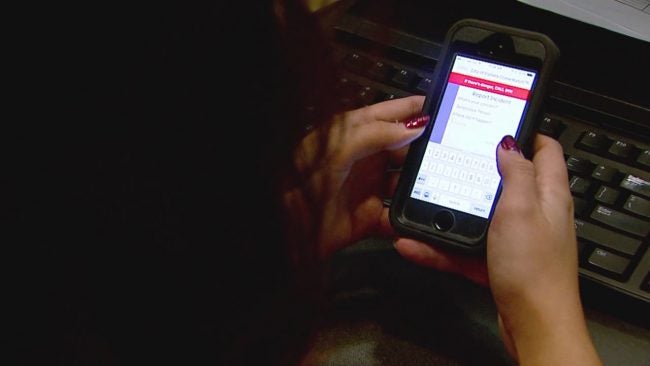 Drive around Fishers, and you might notice the crime watch signs. Now, neighbors aren’t only calling to report suspicious activity, they’re typing it on an app.

“I think it’s great that they’re using new technology to better help us catch criminals out there,” Fishers resident, James Edwards said. “The app just keeps it at our fingertips if we get that on our phone,” Fishers resident Ritu Maheshwari said.

A little more than a week ago, officers said someone used the app to report an erratic driver. “Officers were in the area,” Fishers Officer, Shawn Wynn said. “They were able to get the license plate from the app, down the road, find the vehicle, with the license plate, and sure enough they observed some erratic driving.”

After that, officers arrested the driver for operating while intoxicated. “It obviously works because its lead to an arrest now,” Wynn said. “We’ve got other reports that have come across, and maybe that has deterred crimes in different areas.”

Since it went live, officers made changes in response to neighbors’ suggestions.

Now, when you toggle through, you will see a submit page and also a history tab too. This way you can see what you sent, and keep track of the case.

“The best thing is that it’s on your tips,” Maheshwari said. “So the phone is the one thing that I carry with me anywhere from the library, to school, to grocery stores, so wherever I am. It almost feels like they are accessible if you have the app.”

It’s a piece of technology providing its  neighbors a new way to keep streets safe. “There’s more momentum behind something, the more awareness is created for it,” Edwards said.

You don’t have to be a Fishers neighbor to get the app. However, it’ll only work in the city.

There’s a locator in it, so say if you try to submit something in Indianapolis, it will know you’re there, and not Fishers.