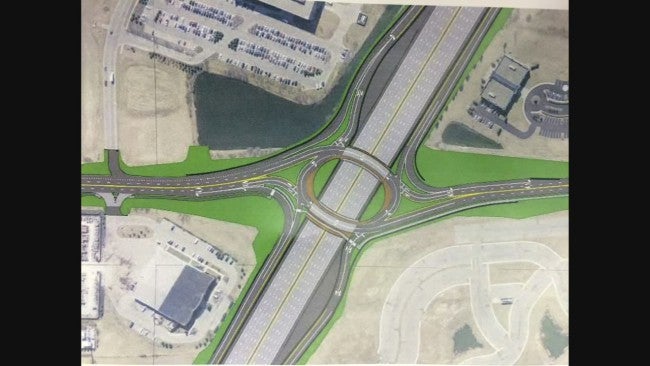 FISHERS (WISH) — There are some concerns over a proposed plan to ease traffic at Interstate 69 and 106th Street in Fishers.

Thousands of drivers pass through that area every day, but not everyone is on board with the proposed solution.

The estimated $34 million project is scheduled to start next spring and should last through 2017.

It was a packed house Thursday evening at Fishers City Hall.

Many people in the auditorium were divided on a proposed plan for a roundabout interchange.

The preliminary design would add a bridge over I-69 and four entrances and exit ramps at 106th Street.

“They look beautiful and I think they will be great for the businesses that are right there,” said Jeannie Sturtevant, a concerned resident. “But they’re not taking into consideration what they’re doing for the people who have lived in that neighborhood for 35 years.”

Residents living near the soon-to-be construction zone said they are worried the interchange will only cause more congestion.

“Tonight to get here, (it took) seven minutes. I had to wait to get out of my driveway and were going to put another thousand cars on that road where are we going to put them?” said Sturtevant.

She said while she supports the idea of progression, she doesn’t think this is the right time for the new addition.

“They’re just going to dump more traffic into the area without making any progress into the streets that we already have,” said Sturtevant. “Before they spend money on putting the exchange in they should fix the streets it leads up too.”

The Indiana Department of Transportation presented its proposal to a crowd of more than 50 people.

The agency understands that residents have concerns and said it’s planning to review every single comment before finalizing the design plan.

“We’ll review them over the next few months, we’ll provide response,” said Nathan Riggs, INDOT. “Many of the comments, questions, and concerns will be incorporate into the final design plan.”

INDOT says another public hearing is not scheduled at this time.