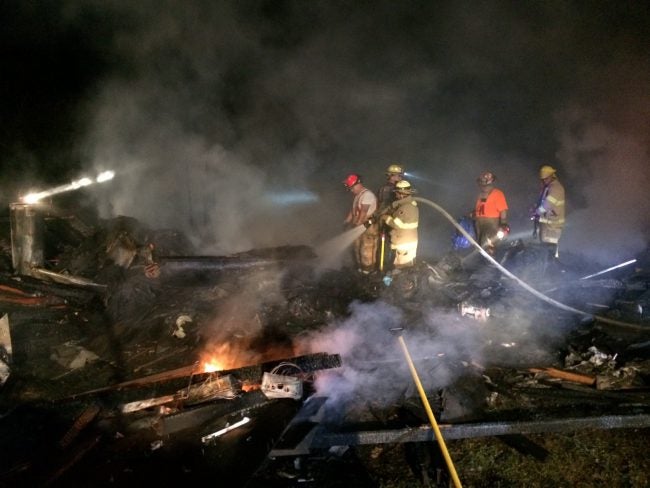 SHELBURN, Ind. (WTWO) — The search for answers is underway following an early morning fire on Saturday that claimed three lives.

The blaze destroyed a home near the 2800 block of State Road 48 just outside the small town of Shelburn in Sullivan County.

The call came in at 3:30 a.m. when a neighbor smelled smoke through an open window.

The neighbor told police that three people were believed to be in the house.

Law enforcement was first on the scene, where they found the fire well underway and could not help the three people inside.

Sullivan County Sheriff Clark Cottom said, “Our deputy tried to make entry into the home and was pushed back from intense heat, flames and smoke. He was not able to get into the home.”

Inside was a grandmother and her two young grandsons. Family members told 24-Hour News 8’s sister station WTWO that the mother of the two boys was at work when the fire started.

After the deputy retreated from the home’s flame, an explosion occurred from what is thought to be the result of the fire coming in contact with a medical oxygen tank.

Chief John Quilliam of Thunderbird Fire Protection Territory said, “The fire itself wasn’t that bad, but the explosion caused the walls to fall out from the structure, which caused the roof to collapse down in on the structure. So basically we had to sift through roofing and ceiling and insulation and lighting to search for the victims.”

The grandmother and the two boys were pronounced dead at the scene, as well as the family dog.

Though the result of this fire is devastating, it is believed to be an accident.

“We have no reason to believe that there is foul play in this particular tragedy,” Cottom said.

The cause of the fire is still under investigation but in cases like this, finding the answers can be challenging.

Officials are waiting to release the identities of the victims until the completion of the autopsies.