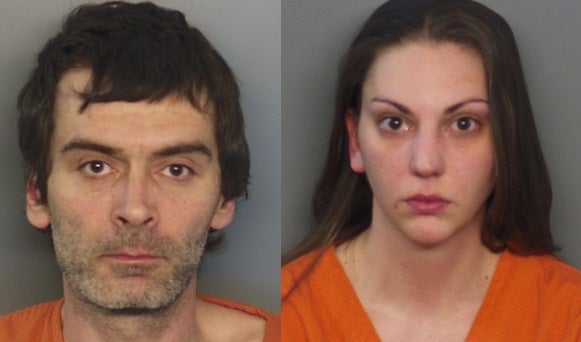 According to the Indiana State Police, at approximately 5 a.m. an ISP trooper spotted a suspicious vehicle parked, with lights off, near the intersection of County road 600 South and Bountiful Place. After approaching the vehicle, the trooper struck up a discussion with the vehicle’s two occupants, 44-year-old Jeremy Grimes and 31-year-old Nicole Asher.

During their conversation, the trooper noticed what he believed to be marijuana inside the vehicle. A subsequent search and investigation of the vehicle turned up a number of drugs. Police say more than eight grams of cocaine, over 100 grams of marijuana and a number of prescription pills were found.

Neither suspect possessed a prescription for the pills. Additionally, it was discovered there was a warrant out for Asher’s arrest for driving while suspended out of Marion County.

Both suspects were transported to the Hendricks County Jail.