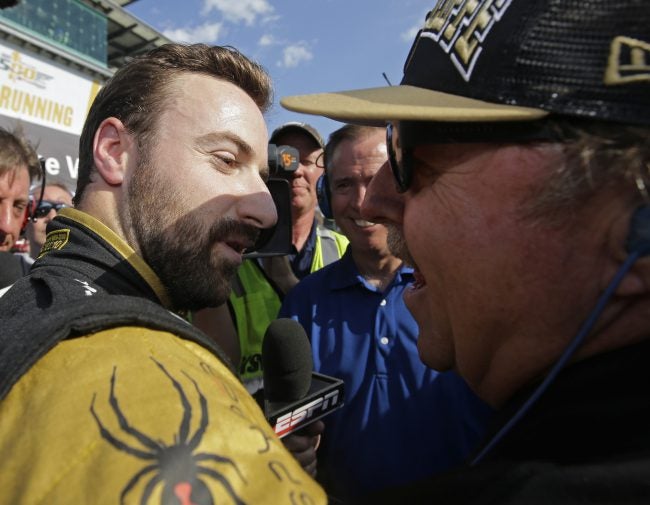 INDIANAPOLIS (AP) – All James Hinchcliffe wanted was a good car.

Turns out, he’ll have the best view in this year’s Indianapolis 500 field.

The Canadian driver, who started second in the race in 2012 and 2014, edged out American Josef Newgarden on the final qualifying attempt of the weekend to claim his first IndyCar pole. Hinchcliffe posted a four-lap average of 230.760 mph, barely ahead of Newgarden, who came in at 230.700.

“It was a great run. The car was stellar,” Hinchcliffe said after winning the fourth-closest pole contest in the race’s 100-year history. “We have the best seat in the house for the biggest race in history.”

Hinchcliffe, who drives for Schmidt Peterson Motorsports, turned one of the most chaotic qualifying weekends in recent memory into one of the most heartwarming stories of the year.

A year ago, Hinchcliffe watched the 500 from a hospital bed after a broken suspension part punctured him in the left leg. The injury required life-saving surgery and forced one of the series’ most popular drivers to miss the season’s final 11 races as he fought his way back to racing.

But Hinchcliffe is only part of an incredible story.

Team owner Sam Schmidt, like Hinchcliffe, was a popular IndyCar driver when he was seriously injured in a 2000 crash at Walt Disney World, which rendered Schmidt a quadriplegic. The next year, Schmidt started an Indy Lights team and now he has expanded what was once a low-budget team into a real contender by claiming three of the top 10 spots in this year’s 33-car starting field

“It was an incredible day,” Schmidt said, noting he had won the 2011 Indy pole with Alex Tagliani exactly five years earlier. “I didn’t think anything would get better than five years ago. I had three cars in the top then and to come out here today…”

Newgarden will start second with Ryan Hunter-Reay, the 2014 race winner, on the outside of the first row.

Roger Penske’s top qualifier was Will Power in sixth, ending the team’s streak of winning the pole in all five of this season’s previous races.

Here are some things we learned from qualifying:

HONDA POWER: The Honda cars have been better all week and, thanks to Hinchcliffe, the engine-manufacturer has its first Indianapolis pole since 2011. Now comes the real test: Which engine will perform better in race conditions?

TOUGH MONTH: Chip Ganassi’s team has struggled all month and they’re hoping a quicker-than-expected engine change could be the turning point. The trouble began when 2013 race winner Tony Kanaan was knocked out of the Grand Prix of Indianapolis in a first turn crash. That was followed by rookie Max Chilton’s crash in practice Saturday, poor speeds in Saturday’s qualifying which kept them out of the pole shootout and Scott Dixon’s engine problem late in Sunday’s practice. Dixon is the team’s highest qualifier at No. 13 after crew members switched engines in 64 minutes, a job that normally requires three hours.

PAYING TRIBUTE: Stefan Wilson of England will make his first career start Sunday after qualifying 30th. But this race will be about a lot more than a rookie. Wilson is driving the Driven2SaveLives car as a tribute to his late brother, Justin, who was killed when debris hit him in the head in Pocono last August. Wilson also is wearing a helmet that bears his colors on one side and his brother’s colors on the other.

FAMILY TIES: Rookie Matt Brabham became the latest third-generation driver to make the race by qualifying 27th. His father, Geoff, made 10 starts at Indy, finishing fifth as a rookie in 1981. Jack Brabham, Matt’s grandfather, made four starts in the 500 and finished a career best ninth as a rookie in 1961.

HISTORY LESSON: Tagliani, the 2011 Indy pole winner, will start 33rd after crashing the No. 35 car during his warmup lap. Tagliani was not seriously injured but he will be the first driver since 1924 to start the race with no official qualifying speed.