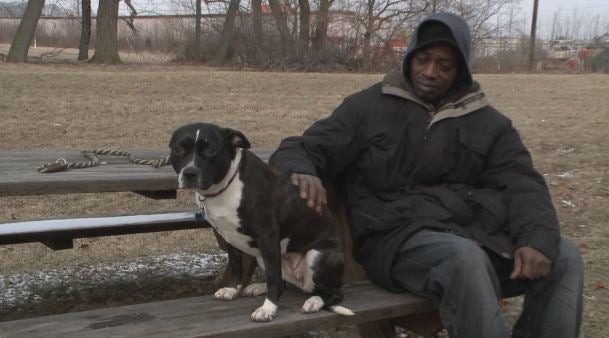 INDIANAPOLIS (WISH) – An Indianapolis man, once homeless and living in the frigid temperatures, is now working towards self-sufficiency. And all the while, he’s had his trusty companion by his side.

“She loves me and I love her,” said Bernard Holland speaking of his dog, Oreo.

The two have been through a lot with one another, from homelessness, now working towards success.

They almost did die together. Just a few short months ago in a bitter cold snap, the two were living in a homeless camp just east of downtown. A less than ideal place for a man and his dog.

“The place where I was at was right by the railroad tracks so I was fearing that I got on those tracks and she got ran over by a train or something,” said Holland.

Fearing for both of their safety, outreach coordinators from Horizon House went to the camp to try to get Bernard shelter.

“He was adamant about not going anywhere without Oreo,” said Melissa Burgess, Street Outreach Leader for Horizon House.

The problem is that shelters don’t accept pets.

“I would stay out here with her if it meant I would have to die with her,” said Holland.

After working with Bernard for weeks, Horizon House coordinators were able to get Oreo sheltered at The Wigglebutt Doghouse on the city’s northwest side, and now, Bernard is even working here part time, making money and visiting her any time he wants.

“My mind was at ease, my heart was at ease that she was taken care of and she was safe,” said Holland.

“What our goal in this is to work on a plan with each individual, treat them as an individual, identify those barriers and then develop a plan to keep them moving forward,” said Burgess.

His outlook on the road ahead:

“I feel absolutely great,” said Holland, with Oreo by his side.

Bernard is currently living in a hotel near where Oreo is staying. He, along with the owners of Wigglebutt Doghouse are paying the bills as he secures a permanent place to live. Horizon House says cases involving pets are particularly hard because they not only have to find a place for the human but also the pet. They’re now looking to secure funding to begin a program that could do both.