Homeowner shoots suspect in attempted robbery on east side of Indianapolis 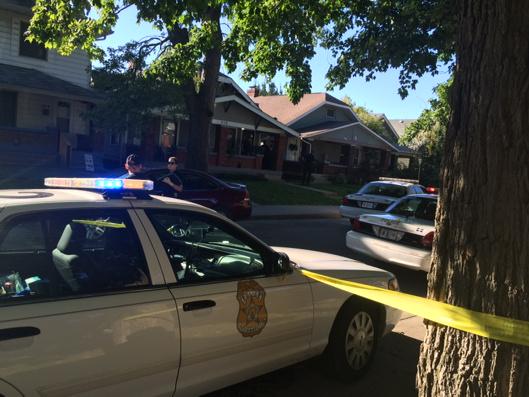 INDIANAPOLIS (WISH) — An attempted robbery on the east side of Indianapolis landed a suspect in the hospital with a gunshot wound to the head.

Police said an elderly man pulled the trigger when the suspect pulled a gun on his wife.

It happened in the 700 block of North Bosart Monday afternoon.

The suspect, identified as Anthony Talley, 27, was taken to the hospital in critical condition.

Some people coming home from work discovered a crime scene in their neighborhood.

“A neighbor had called me and said, ‘Hey, you know there’s a lot of police activity going on and everything,'” said Sam Dixon, neighbor. “Come to find out a neighbor had gotten robbed.”

Dixon said he moved into his home about a year ago. He said the neighborhood was fairly quiet until now.

“It’s a little shocking, but, I mean, at the same time with everything that’s going on it’s a little crazy,” said Dixon.

Police said officers responded to a call for a person shot. When they arrived on scene, they found the suspect injured inside of the elderly couple’s rental office.

“The suspect had pulled out a gun, attempted to rob the occupant. One of the other occupants intervene and shot the suspect,” said IMPD Sgt. Brian Gabel.

Police said the elderly woman welcomed the suspect inside not knowing his motive.

“He actually came and greeted the residence inside of the home to speak to him. About (what), I don’t know what they were talking about, but he was inside the address,” said Sgt. Gabel.

Police are still in the early stages of the investigation, but they do not believe charges will be filed against the elderly man.

“He’s a pretty nice guy you know, he comes out to talk with us and all that and he goes on about with his business,” said Dixon.

Dixon said he has talked to the elderly man several times before. He said the man works out of the home.

“Actually, I think it’s just a rental office where, I guess, people come and pay their rent and all that type of stuff like that,” said Dixon.

Police recovered two guns inside of the home.

Police said Talley had warrants out for his arrest in Marion and Johnson Counties.