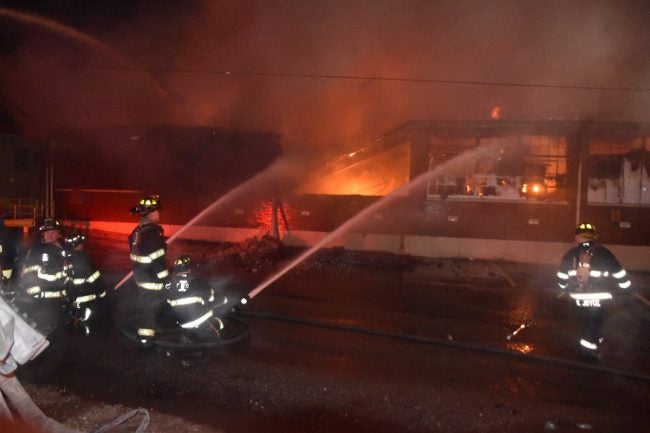 Firefighters were dispatched to the Advanced Restoration building in the 100 block of South Sherman Drive just before 6:45 p.m.

According to IFD, 72 firefighters responded to the blaze and found the building fully involved.

After battling the fire for over three hours, IFD said the main fire had been knocked out, however interior hot spots were preventing them from marking it under control.

Firefighters use chainsaws to cut through trees alongside south side of structure at 115 S Sherman to effect handline operation. @CSX stopped passenger trains headed through area for safety of crews. pic.twitter.com/j4Tc045uZX– IFD NEWS (@IFD_NEWS) January 31, 2018

According to IFD, CSX passenger trains that were heading through the area were stopped for the safety of fire crews on scene.

Damages have been estimated at $1.5 million.

Crews monitor interior collapse of structure as heavy fire rips through bldg at 115 S Sherman. Blaze still not yet under control 2 hours in. Multiple fire apparatus resources pulling water from hydrants all at once ….cause supply & demand problems. @citizensenergy helping out pic.twitter.com/WcLyD9L8Ba– IFD NEWS (@IFD_NEWS) January 31, 2018

No one was injured, and a cause has not been determined.