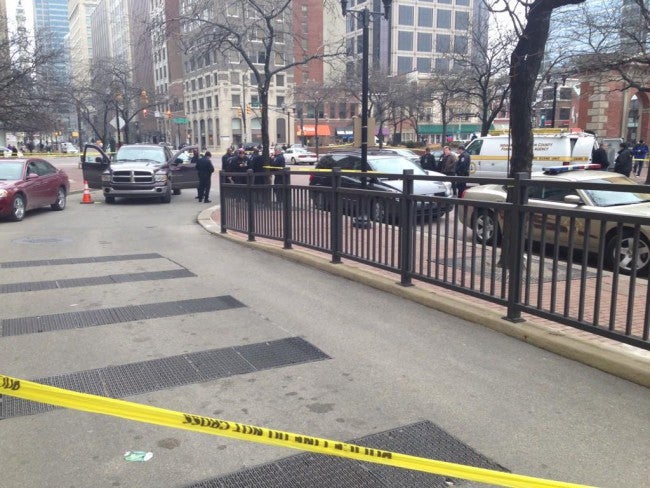 INDIANAPOLIS (WISH) – Police say just after 1 p.m. Wednesday, a woman, suffering from a gunshot wound was pulled from a pickup truck in front of the City-County Building.

Police report that a man pulled up in front of the City-County Building, on Delaware Street and Market Street, stating that he needed assistance. The man got out of the truck with a gun, telling police that someone shot at his truck. The man was taken down to the ground immediately.

Inside the bullet-riddled truck, police found a woman suffering from multiple gunshot wounds. She was transported to Sidney and Lois Eskenazi Hospital in critical condition.

The man was later taken to police headquarters for questioning. He was not under arrest as of Wednesday evening.

According to witnesses, the driver told police he had about $30,000 in cash inside the truck. However, police would not confirm if the man had a large amount of cash in the vehicle.

Police don’t believe the shooting occurred downtown, but they shut down Market Street as a precaution, while investigating.

As of Wednesday evening, the victim was listed in critical condition.

In an evening release, police added they are not sure where the shooting started. So far, no suspects have been identified.*Editors note: Police say earlier reports of the victim being deceased were incorrect.