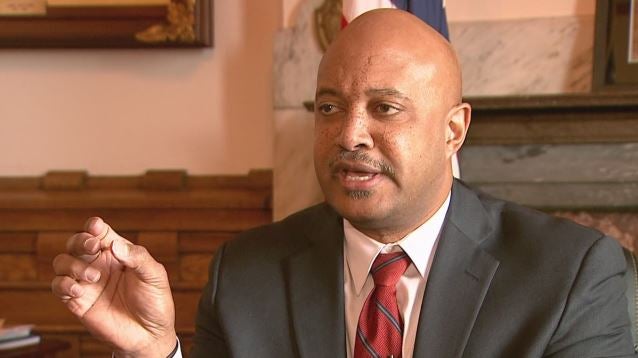 INDIANAPOLIS Ind. (WISH) — As Indiana’s newly-elected officials are starting to get comfortable in their offices, Attorney General Curtis Hill sat down with 24-Hour News 8 to talk about his first month in office.

Like anyone starting a new job, Hill and his staff are still adjusting to the new way of life, he told 24-Hour News 8’s Joe Melillo. But that hasn’t’ stopped the attorney general from making headlines on a few different issues.

Several bills moving through the Statehouse right now have grabbed Hill’s attention, including one which would allow local communities to implement needle exchange programs. Gov. Eric Holcomb says he’s in favor of the programs.

Hepatitis-C cases in Scott County dropped because of the needle exchange, and the program was renewed.

“I certainly applauded those efforts,” Hill said. “My concern on needle exchange is that we make certain that we don’t do anything to make the problem even worse.”

Hill also says he would like to see a comprehensive plan in place that not only provides clean needles but incorporates community addiction programs.

“The biggest problem with the heroin addiction problem is the number of overdoses that have occurred,” Hill explained. “Ultimately my responsibility as a citizen is to do whatever I can — that we are doing something about the fact that more and more people are engaging in heroin use and therefore exposing themselves to possible death — and that is ultimately our responsibility.”

Former Attorney General Greg Zoeller had a reputation for filing lawsuits against the federal government. Hill says he will take similar action in order to protect Hoosier interests.

“I don’t have to go after everything that happened,” the new attorney general said. “What I’m looking for: has the federal government taken an action that is unconstitutional, and is it detrimental to the state of Indiana? That is a pretty good red flag for me to take action,” Hill explained. “I love this country. I think we are blessed to be here. We have so many advantages, and it’s important that all of us participate in any way that we can.”