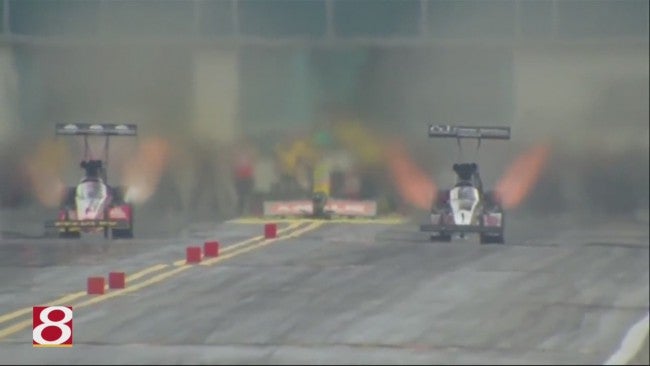 BROWNSBURG, Ind. (WISH) — Three-time NHRA Champion Larry Dixon is back home in Indiana after surviving a spectacular crash over the weekend.

The crash just happened Saturday and a YouTube video of it already has more than 1 million views.

It all happened during a qualifying run Saturday in Florida. The car split and sent Dixon flying into the air.

Dixon suffered no serious injuries. He described the incident Tuesday at his team’s shop in Brownsburg.

“I’m just hoping when I’m in the air that I land back on the asphalt,” he said. “The reason being, to help scrub all that speed. The car’s going over 300 miles an hour at that point.”

The central Indiana resident flew an estimated 20 feet in the air. But Dixon, a 20-year Top Fuel racing veteran, says it wasn’t his worst crash.

“I’ve had ones where I broke legs, got knocked out, helicopters to the hospital, things like that,” he said. “Anytime you can walk away from an accident, it wasn’t that bad.”

No crash has scared Dixon away from the track and he says this one is no different. His team is already preparing a different car so he can get back on the track next weekend.

He says the crash is affecting him in a positive way.

“All the safety equipment that I wear, it’s doing it’s job. You don’t have to wonder about it. From that side, it’s a sense of comfort,” he said.

Dixon’s team is still trying to determine what caused the accident. He says by the end of the week they may know the answer.