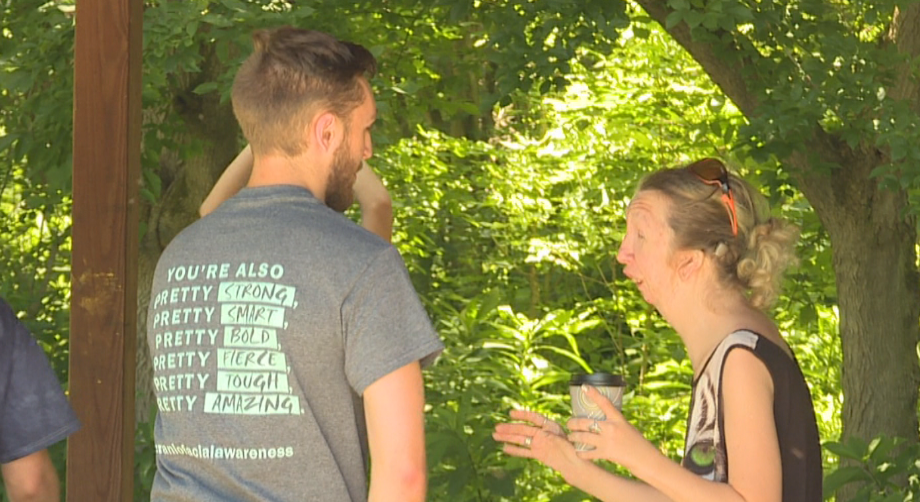 MARTINSVILLE, Ind. (WISH) — A central Indiana camp for children born with craniofacial anomalies celebrated a milestone anniversary with an extended summer program at the 2,500-acre Bradford Woods in Martinsville.

“Camp About Face” marked its 30th year by hosting a group of nearly 40 children for two weeks. The summer camp – usually a week long – is funded by the Riley Children’s Foundation and was created in 1989 to foster acceptance and confidence.

Nurses, doctors and counselors sought to establish a “safe place” where children victimized by bullying and isolation could bond with peers who had experienced similar physical, mental and social challenges.

The campers, ages 8 through 18, are often shy and withdrawn when they first arrive at Bradford Woods, counselors said; some have never met other children with craniofacial anomalies.

“I didn’t really know what I was going to experience here,” said Brandan Aughinbaugh, 18, recalling his first summer at Camp About Face as an 8-year-old. “I was scared. I was terrified. But once I got here, I realized that there were a whole lot more people like me with cleft lip, cleft palate or some other craniofacial anomaly. It made me feel like I wasn’t alone.”

Mean-spirited nicknames – including “scar face” and “pig nose” – shattered his self-esteem as a child, he told News 8.

Aughinbaugh said he was taunted by classmates who were unfamiliar with cleft palate and eventually felt as if he “wasn’t really up for the challenge of being on this earth.”

“I struggled with that for a long time,” he revealed. “Then I came to this camp in elementary school and it opened my eyes. It made me feel like I was worthy of being here… as a human being.”

He met other children who had resigned themselves to a lifetime of public stares, uncomfortable questions and feelings of unworthiness. Together, they outgrew their insecurities and began to embrace the value of inner beauty.

Today, Aughinbaugh comes across as a social, confident leader with a flair for the dramatic. He plans to enroll in the American Musical and Dramatic Academy this fall in New York.

The aspiring performer recalled his favorite Camp About Face memories as he prepared to leave behind the calming stillness of Bradford Woods for the bright lights of the Big Apple.

“Guiding the younger kids at camp and helping them deal with the exact same things I went through is really empowering,” explained Aughinbaugh. “Those memories definitely stand out to me.”

He urged campers to remember their own struggles with prejudice and discrimination when encountering other people with outward differences.

“We’re all the same, no matter what we look like,” said Aughinbaugh.