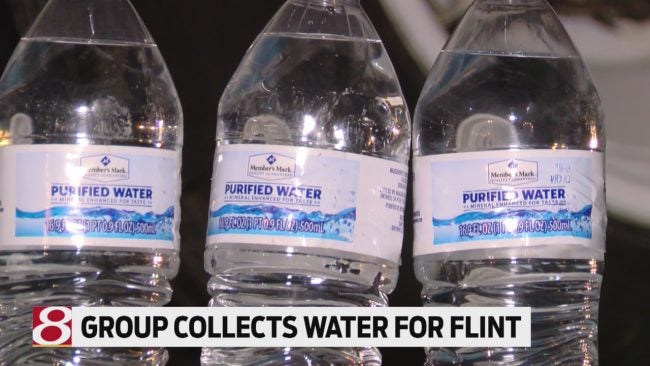 INDIANAPOLIS (WISH) – People in Indianapolis are coming together to collect bottled water for people living in Flint, Michigan. Residents there have been impacted by lead contaminated tap water.

On Friday, the group Forward for Flint made their final push for water donations. They parked a truck outside of a charity basketball game and asked people to bring a case to donate.

“About two days before Thanksgiving I was on Facebook and I saw that Flint still doesn’t have clean water so it was my initial idea just to drive up there myself and I was like how can I capitalize on this? How can I make this a bigger deal?” said Chelsea Johnson, founder of Forward for Flint.

Johnson says she turned to social media to get the word out and ask for donations. The idea took off from there.

“We went from maybe an 18 seat van to maybe two vans. Now we need a U-Haul,” said Juanette Hadnott. Hadnott is working with Johnson to organize the collection.

“They don’t have something that we have and we take it for granted here. Even if we are in America. These people are four hours away from us and they still don’t have clean water,” said Hadnott.

Those involved say it makes them feel good to help others around the holidays. They plan to drive all of the water up to Flint on Saturday morning so people there can have it before Christmas.