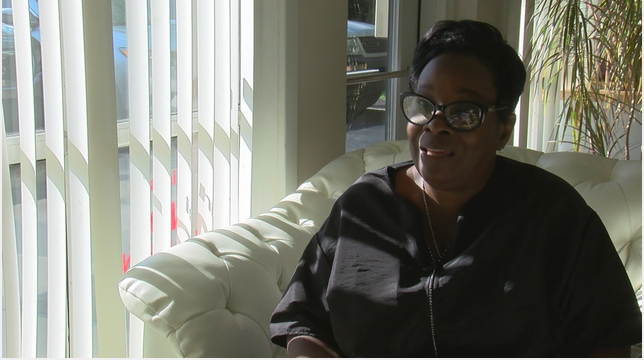 INDIANAPOLIS (WISH) – An Indianapolis designer known for creating chain dresses is preparing to show her innovative collection during LA Fashion Week in October.

Gwen Hodges revealed she first began crafting the slinky metal pieces in 2010 while struggling with depression.

The longtime hairdresser said she felt like she “lost everything” after the deaths of two close friends and a string of other personal setbacks that year.

“So I went to [arts and crafts store] Hobby Lobby one day, and I just walked around and decided to buy about $50 or so of chain,” Hodges recalled.

Desperate for something to distract herself from the pain of losing loved ones to cancer, she began linking together bits of chain with jump rings and found the repetitive handiwork therapeutic.

“I remember that first piece [that I made] that first day,” she said with a smile. “I remember making all of them but I couldn’t make [the same thing] again. I don’t use patterns so they’re all originals.”

Hodges continued creating intricate designs with her Hobby Lobby supplies, often working feverishly until 2 a.m. after a long day at the salon.

“I would be making dresses in a silent room,” she said. “No TV; no music. It felt good doing something I could care about that much.”

Hodges credited the creative energy and her unrelenting faith with helping her overcome depression.

“I know I’ve come a long way since I can smile and talk about what I went through without crying,” she said Sunday during a dress fitting with a group of her models.

Seven years later, Hodges has created countless dresses; won a design award in Ohio; shown pieces in London; expanded into jumpsuits, swimsuits and menswear; and embarked on preparations for her first runway show in Los Angeles.

“This is a dream come true,” she said.

Hodges has since replaced her Hobby Lobby chains with metal from New York, London and beyond. She also traded her art store pliers with more efficient – and unlikely – couture tools.

“My mom did research in the medical field so she has all these surgical tools,” she explained with a laugh. “So that’s basically how I [make dresses] – with her old surgical clamps.”

Each dress requires thousands of jump rings. Hodges stops counting when she reaches 3,000.

The collection she plans to show in Los Angeles took more than a year to create, she told 24-Hour News 8, and will be worn on the runway by models from the Midwest.

“Some of them have been working with me for years,” Hodges said. “There aren’t as many modeling opportunities for them here in Indy… I’m creating this opportunity for them.”

Deneisha Henderson, a plus-size model included in her Fashion Week line-up, said local castings are often scarce and geared toward a narrow selection of talent.

“It can be tough,” she admitted. “You have to get used to hearing ‘No’ all the time. Especially in my [plus-size] genre, being in LA Fashion Week is humongous. It’s something to be celebrated. I’m proud of myself and I’m thankful for Miss Gwen.”

Hodges is still seeking models for her runway show in Los Angeles from October 11-15. Her current selection of models are all from her home state of Indiana.