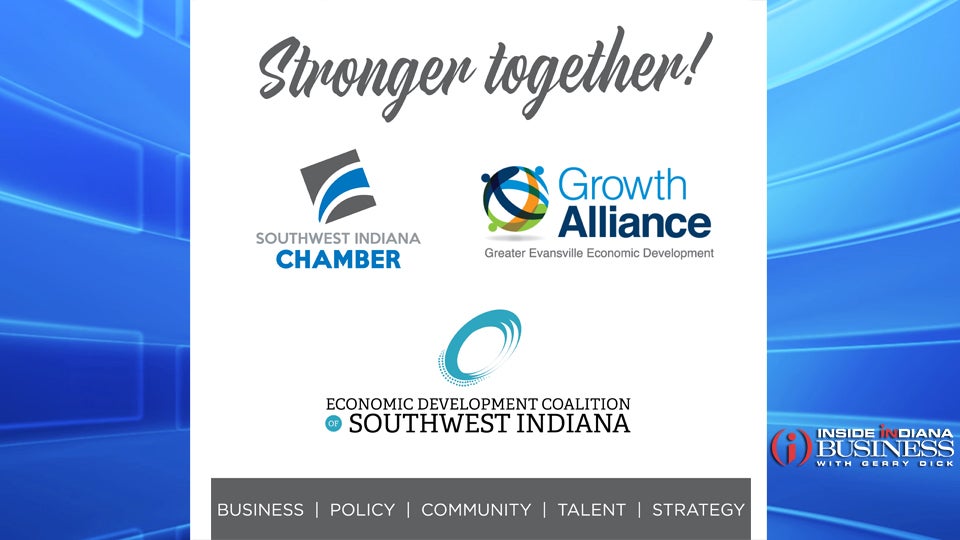 EVANSVILLE, Ind. (Inside INdiana Business) — Three economic development organizations in southwest Indiana that say they share a vision for growth and prosperity in the region have merged. The Economic Development Coalition of Southwest Indiana, Growth Alliance for Greater Evansville and Southwest Indiana Chamber will join forces effective April 1.

The unified organization says together it will advance the interests of businesses and fuel economic and community growth in the Evansville region.

“All three organizations have a proud tradition of accomplishment,” said Greg Wathen, President and Chief Executive Officer of the Economic Development Coalition of Southwest Indiana. “By pooling and unifying essential economic development functions into a single structure, we have an opportunity to better serve the region with a bolder vision for the future.”

Wathen will serve as a co-CEO, along with Southwest Indiana Chamber President and CEO Tara Barney, during the transition.

“Having these three organizations recognize that we can be so much more impactful together… aggregated into an organization that can be really well prepared to represent this region, because we’re competing against a big globe out there,” said Barney. “And everything we can do to center ourselves forward with our particular strengths and the secret sauce that makes up our geography.”

In October, the organizations announced their intentions to explore a merger. Since then, the group analyzed the finances, public policies and technology that would be impacted by the strategic integration.

“(It is) a fairly historic vote where we had 120 plus collective members of our boards say ‘yes,’ and I think that speaks volumes to the process that we follow…..as well as trying to address all of the issues that were brought up during the process,” said Wathen.

The organization says under one umbrella, it will simplify the process for companies that want to settle in southwest Indiana to know where to access resources.

“We are very pleased that after months of document review, discussion and best-practice research–including study of similar regions seeking increased velocity–we have clear direction and authorization from our collective boards to aggregate the work, the assets, the staffs, and the expertise of three very sound organizations into one,” said Lynell Walton, Growth Alliance for Greater Evansville Board Chair.

The name and brand of the new organization will be released in April when the merger becomes effective.