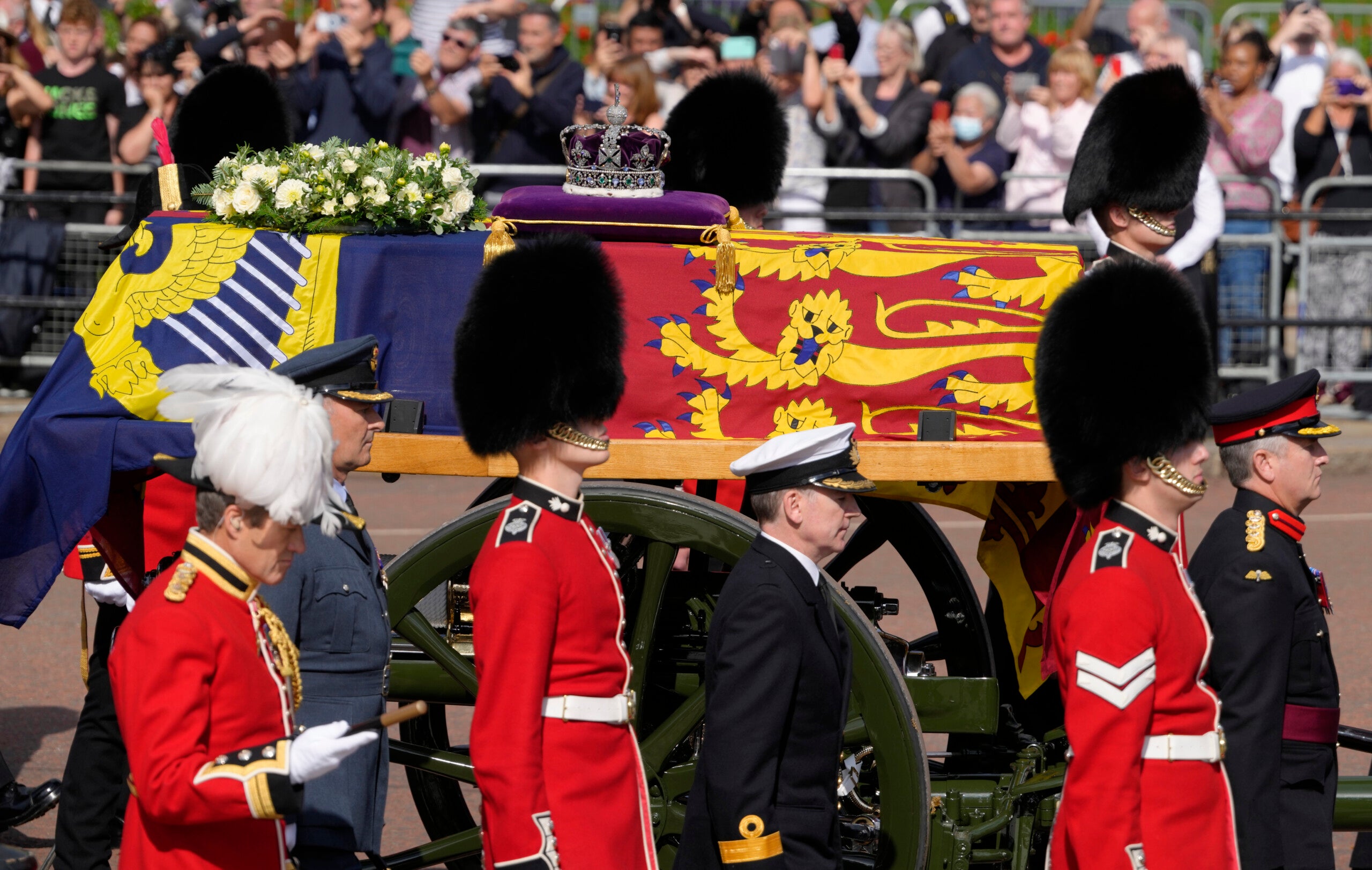 Grenadier Guards flank the coffin of Queen Elizabeth II during a procession from Buckingham Palace to Westminster Hall in London, Wednesday, Sept. 14, 2022. The Queen will lie in state in Westminster Hall for four full days before her funeral on Monday Sept. 19. (AP Photo/Kirsty Wigglesworth)
by: Associated Press
Posted: Sep 15, 2022 / 08:53 AM EST / Updated: Sep 15, 2022 / 01:46 PM EST

LONDON (AP) — Two minutes of silence will be observed across the United Kingdom at the end of Queen Elizabeth II’s state funeral at Westminster Abbey on Monday giving the public across the nation a chance to pay their respects to the late monarch.

Buckingham Palace released details Thursday of the state funeral of the queen who died Sept. 8 at age 96 and private interment later Monday.

On Friday evening, King Charles III and his siblings will stand vigil at their mother’s coffin for 15 minutes as it lies in state at the 900-year-old Westminster Hall at the Houses of Parliament. Charles, Princess Anne, Prince Andrew and Prince Edward also stood vigil with the coffin when it lay in St. Giles’ Cathedral in Edinburgh earlier this week.

After the state funeral, attended by some 2,000 guests, including visiting heads of state and other dignitaries, Elizabeth’s coffin will be transported through the historic heart of London from Westminster Abbey to Wellington Arch near Buckingham Palace on a horse-drawn gun carriage with Charles and other royals walking behind.

The coffin will then be driven in the state hearse to Windsor for a committal service at St. George’s Chapel near Windsor Castle, where the coffin will be lowered into the Royal Vault and the sovereign’s piper will play a lament, the Archbishop of Canterbury will pronounce the blessing and the congregation will sing “God Save The King.”

Members of the royal family will then hold a private burial service at the King George VI Memorial Chapel, where the queen will be interred with her late husband, Prince Philip, who died last year.