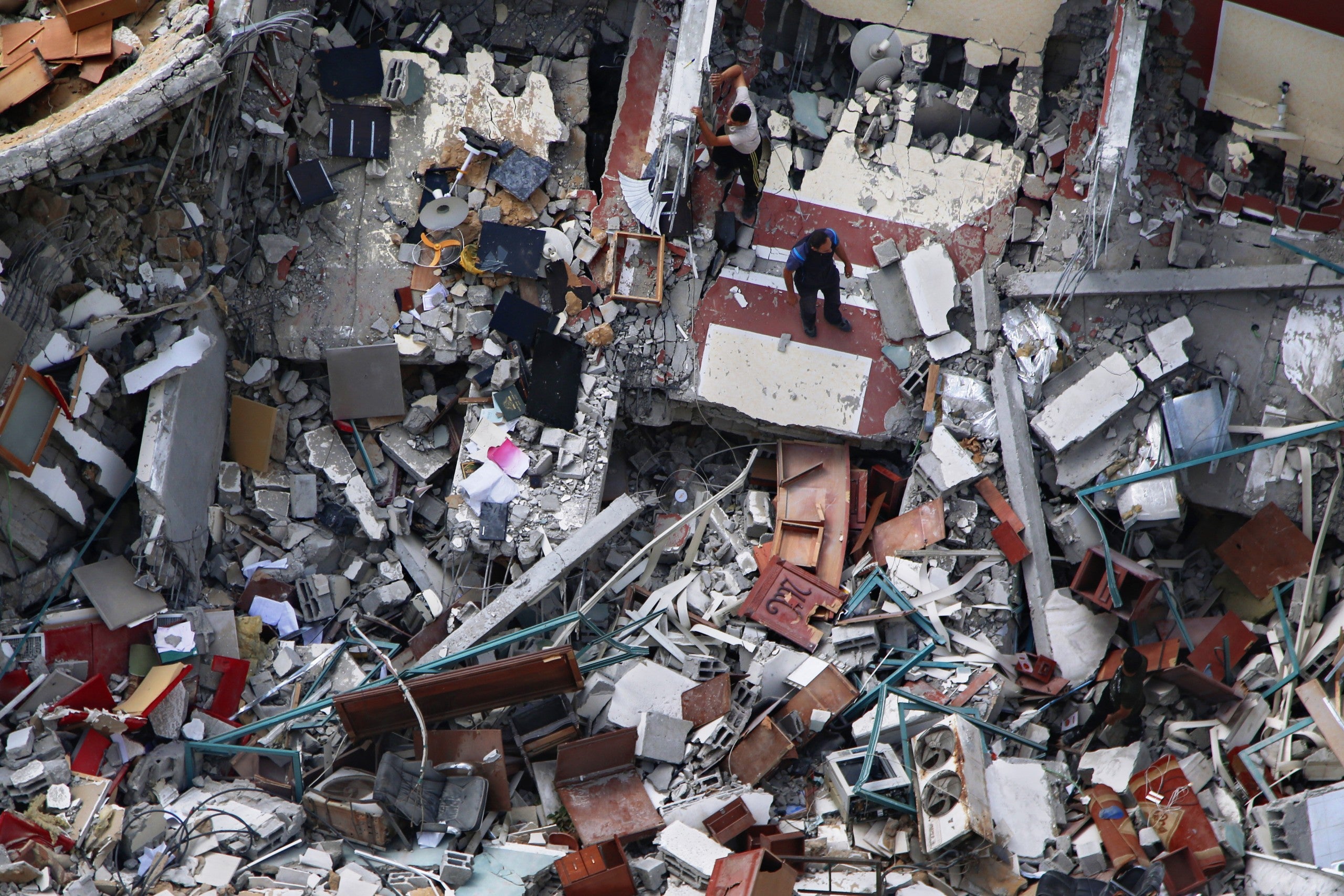 Palestinians inspect the destroyed building housing the offices of The Associated Press and other media, after it was hit last week by Israeli airstrike, in Gaza City, Friday, May 21, 2021. A cease-fire took effect early Friday after 11 days of heavy fighting between Israel and Gaza's militant Hamas rulers that was ignited by protests and clashes in Jerusalem. (AP Photo/Hatem Moussa)
by: FARES AKRAM and JOSEPH KRAUSS Associated Press
Posted: May 21, 2021 / 09:30 AM EST / Updated: May 21, 2021 / 09:30 AM EST

GAZA CITY, Gaza Strip (AP) — Palestinians rallied by the thousands Friday after a cease-fire took effect in the latest Gaza war, with many viewing it as costly but clear victory for the Islamic militant group Hamas. Israel vowed to respond with a “new level of force” to any further hostilities.

The 11-day war left more than 200 dead — the vast majority Palestinians — and brought widespread devastation to the already impoverished Hamas-ruled Gaza Strip. But the rocket barrages that brought life to a standstill in much of Israel were seen by many Palestinians as a bold response to perceived Israeli abuses in Jerusalem, the emotional heart of the conflict.

Israeli Prime Minister Benjamin Netanyahu warned against further attacks, saying, “If Hamas thinks we will tolerate a drizzle of rockets, it is wrong.” He vowed to respond with “a new level of force” against aggression anywhere in Israel.

The Israeli leader, who has faced criticism from his hawkish base for ending the offensive prematurely, said Israel had done “daring and new things, and this without being dragged into unnecessary adventures.” He added that Israeli forces had caused “maximum damage to Hamas with a minimum of casualties in Israel.”

The truce faced an early test when clashes broke out between Palestinian protesters and Israeli police following Friday prayers at the Al-Aqsa Mosque compound, a flashpoint holy site in Jerusalem that is sacred to Jews and Muslims. It was unclear what sparked the violence.

Police fired stun grenades and tear gas, and Palestinians hurled rocks and at least one firebomb after hundreds took part in a celebratory demonstration in which they waved Palestinian and Hamas flags and cheered the militant group. Clashes between protesters and police there earlier this month were one of the main triggers for the war.

Protesters also clashed with Israeli troops in parts of the occupied West Bank, which has seen violent demonstrations in recent days linked to Jerusalem and Gaza.

Thousands took to the streets of Gaza as the cease-fire took hold at 2 a.m. Young men waved Palestinian and Hamas flags, passed out sweets, honked horns and set off fireworks. Celebrations also broke out overnight in east Jerusalem and across the occupied West Bank. Israel captured all three territories in the 1967 war and the Palestinians want them for their future state.

An open-air market in Gaza City that was closed throughout the war reopened and shoppers could be seen stocking up on fresh tomatoes, cabbage and watermelons. Workers in orange traffic vests swept up rubble from surrounding roads.

“Life will return, because this is not the first war, and it will not be the last war,” said shop owner Ashraf Abu Mohammad. “The heart is in pain, there have been disasters, families wiped from the civil registry, and this saddens us. But this is our fate in this land, to remain patient.”

There was little to celebrate in the hard-hit northern town of Beit Hanoun, where residents, many of whom had lost loved ones, surveyed wrecked homes.

“We see such huge destruction here, it’s the first time in history we’ve seen this,” said Azhar Nsair. “The cease-fire is for people who didn’t suffer, who didn’t lose their loved ones, whose homes were not bombed.”

Like the three previous wars, the latest round of fighting ended inconclusively. Israel claimed it inflicted heavy damage on Hamas with hundreds of bruising airstrikes but once again was unable to halt the rockets.

Hamas also claimed victory but faces the daunting challenge of rebuilding in a territory already suffering from high unemployment and a coronavirus outbreak.

At least 243 Palestinians were killed, including 66 children, with 1,910 people wounded, according to the Gaza Health Ministry, which does not list the numbers of fighters and civilians. Twelve people were killed in Israel, including a 5-year-old boy and 16-year-old girl.

In Gaza, rescue workers were still recovering bodies from areas that had been too dangerous to enter. Five were collected Friday in the southern town of Khan Younis, including that of a 3-year-old, the Red Crescent emergency service said.

The fighting began May 10, when Hamas militants in Gaza fired long-range rockets toward Jerusalem. The barrage came after days of clashes between Palestinian protesters and Israeli police at Al-Aqsa. Heavy-handed police tactics at the compound, and the threatened eviction of dozens of Palestinian families by Jewish settlers had inflamed tensions.

The competing claims to Jerusalem lie at the heart of the conflict and have repeatedly triggered bouts of violence.

The cease-fire was brokered by neighboring Egypt after the U.S. pressed Israel to wind down the offensive. U.S. Secretary of State Antony Blinken plans to visit the region “to discuss recovery efforts and working together to build better futures for Israelis and Palestinians.” the State Department said.

Hamas and other militant groups fired over 4,000 rockets at Israeli cities, launching them from civilian areas. Dozens landed as far north as the bustling commercial capital of Tel Aviv.

Israel, meanwhile, carried out hundreds of airstrikes, targeting what it said was Hamas’ military infrastructure.

The United States, Israel’s closest and most important ally, initially backed what it said was Israel’s right to self-defense against indiscriminate rocket fire. But as the fighting dragged on and deaths mounted, the Americans increasingly pressured Israel to stop the offensive.

President Joe Biden welcomed the cease-fire. He said the U.S. was committed to helping Israel replenish its supply of interceptor missiles and to working with the internationally recognized Palestinian Authority — not Hamas — to provide humanitarian aid to Gaza.

Netanyahu faced heavy criticism from members of his hawkish, nationalist base. Gideon Saar, a former ally who leads a small party opposed to the prime minister, called the cease-fire “embarrassing.” Itamar Ben Gvir, head of the far-right Jewish Power party, tweeted that the cease-fire was “a grave surrender to terrorism and the dictates of Hamas.”

In a potentially damaging development for the Israeli leader, the Palestinian militants claimed Netanyahu had agreed to halt further Israeli actions at the Al Aqsa Mosque and to call off the planned evictions of Palestinians in the nearby Sheikh Jarrah neighborhood. An Egyptian official said only that tensions in Jerusalem “will be addressed.”

Some 58,000 Palestinians sought shelter in crowded U.N. schools amid a coronavirus outbreak. Thousands returned to their homes as the truce took hold.

The fighting dealt another blow to the already decrepit infrastructure in Gaza. The small coastal territory, home to more than 2 million Palestinians, has been under an Israeli-Egyptian blockade since Hamas seized power from forces loyal to Palestinian President Mahmoud Abbas in 2007, confining his authority to parts of the occupied West Bank.

The World Health Organization says 30 health facilities in Gaza were damaged, with one clinic destroyed and another with significant damage. An airstrike damaged the only facility in Gaza processing coronavirus tests, forcing a halt to testing in the territory.

Fabrizio Carboni, regional director for the Near and Middle East at the International Committee of the Red Cross, estimated there were “several hundred” pieces of unexploded ordnance strewn in Gaza, adding that medical supplies were a pressing need.