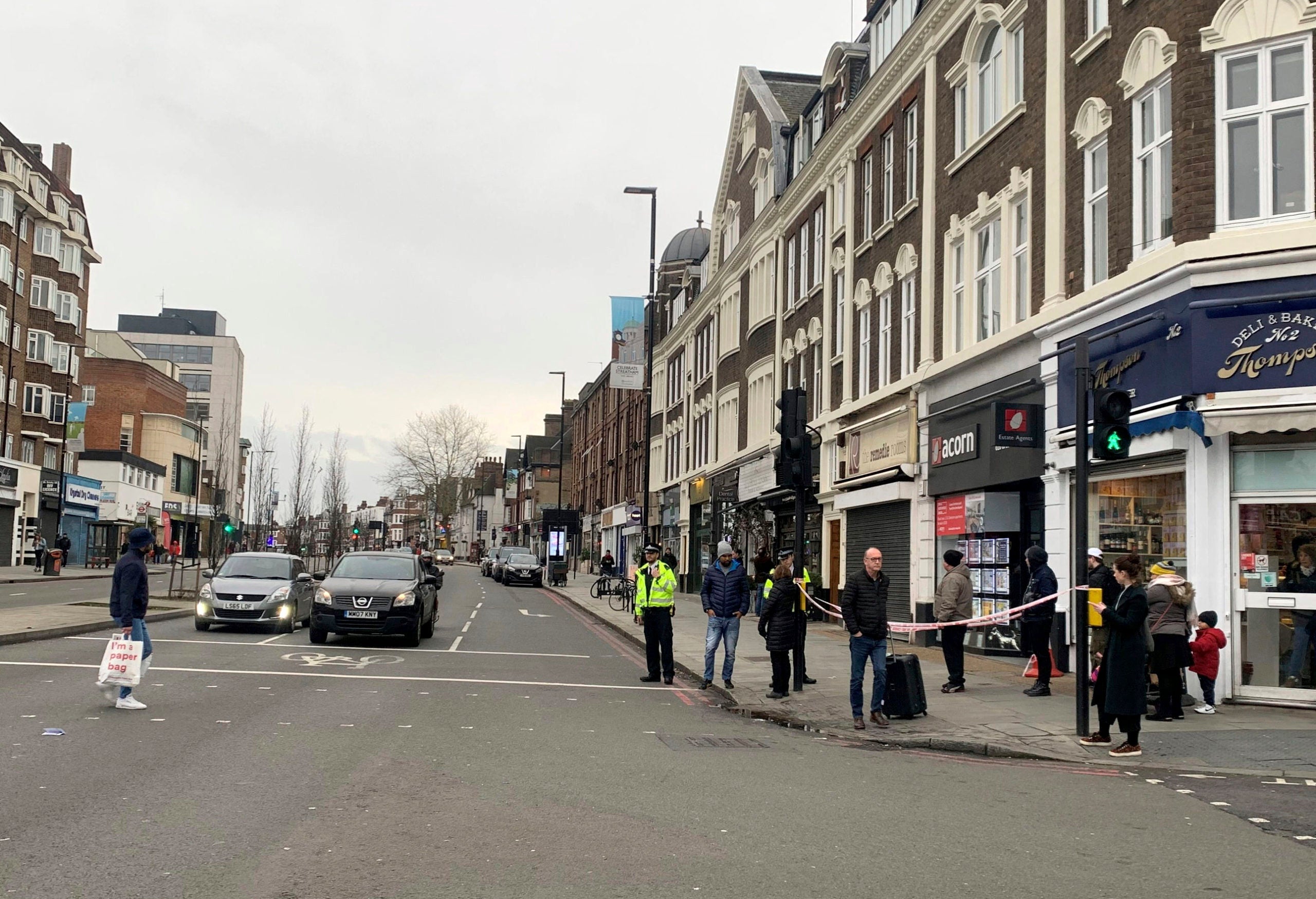 LONDON (AP) — A man with a fake bomb strapped to his body stabbed two people in a “terrorism-related” attack on a London street Sunday before he was shot to death by police, authorities said.

One stabbing victim was hospitalized with life-threatening wounds and the other suffered less-serious injuries in the attack, which took place about 2 p.m. in the Streatham section, a combined residential and commercial neighborhood about 5 miles (8 kilometers) south of central London, police said.

Officers responded quickly to the stabbings because of a “proactive counter-terrorism operation” that was underway, Deputy Assistant Commissioner Lucy D’Orsi said with elaborating. Video from the scene appeared to show three undercover police officers in an unmarked car making a quick stop and emerging with weapons.

D’Orsi said police believe the bloodshed was related to Islamic extremism. She gave no details.

The drama far from central London marked a departure from recent terror attacks in the British capital that took place near world-famous landmarks such as London Bridge and the Houses of Parliament.

D’Orsi said the device strapped to the assailant’s body was quickly determined to be a hoax.

Investigators gave no immediate details on the attacker. But police declared the violence terrorism-related more quickly than they have in similar cases in the past, suggesting they may have had information about him. And the police mention of an active counterterrorism operation suggested he may have been under surveillance.

D’Orsi said there was no “continuing danger” to the public, but the area remained cordoned off as the investigation continued. The usually busy area was deserted as the public heeded police requests to stay away.

The attack caused chaos and panic on what had been a typical Sunday afternoon, with the streets filled wish shoppers.

Karker Tahir said he was at work when he saw police chasing a man down Streatham High Road, the area’s main shopping district.

“They kept telling him, ‘Stop! Stop!” Tahir said. “But he didn’t stop, and then I saw that they shot him three times. It was horrible seeing it. The man was on the floor and it looked like he had something, which police said may be a device. Police came to us and said, ‘You have to leave the shop because he has a bomb in his bag.’”

Images shared on social media showed a man lying on the sidewalk outside a pharmacy. Emergency medical vehicles quickly filled the street and helicopters hovered overhead.

“The circumstances are being assessed,” the Metropolitan Police tweeted. “The incident has been declared as terrorist-related.”

Bell Reberio-Addy, a member of Parliament who represents Streatham, said police assured her it was an “isolated incident.”

Stephen Roberts, a former deputy commissioner for the Metropolitan Police, said if the stabbings were carried out by a “self-starter” — someone acting alone — it means any city in the country is vulnerable to a similar sort of low-tech attack.

The bloodshed took place a little over two months after two people were stabbed to death near London Bridge by a man who had recently been released from prison, where he was serving a 16-year sentence for plotting a terror attack.

It was lowered because of the belief that the threat of British jihadis returning to the country from Syria had been reduced by events there, including the Islamic State group’s loss of territory.

“Terrorists seek to divide us and to destroy our way of life,” he said. “Here in London we will never let them succeed.”

This story has been updated to show that Roberts is a former deputy police commissioner in London.