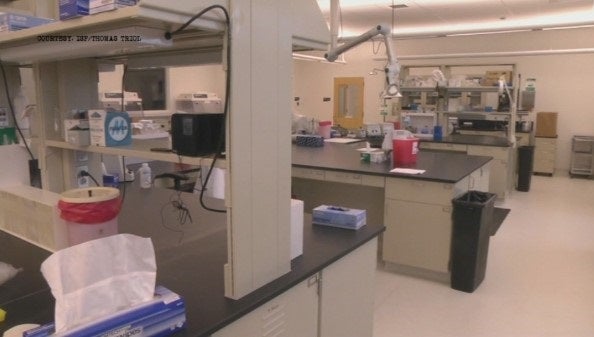 INDIANAPOLIS (WISH) — Indiana’s opioid addiction is seeping its way deep into our state drug testing laboratories. Those labs are now deeply embedded in the fight to stop the deadly drugs. Those street drugs are so dangerous, scientists in the labs have to use tools you probably wouldn’t think of just to stay alive.

Grey death, Jackpot, TNT. Those are just a few street names of opioids circulating on Indiana streets that are killing Hoosiers.

Griffin works in the trenches of Indiana’s opioid addiction fight.

“We are seeing heroin, mixtures of heroin and fentanyl,” Griffin explained. “Acetylfentanyl, acrylfentanyl, carfentanil – which is the bull-elephant tranquilizer. It’s very, very strong.”

According to the Drug Enforcement Agency, Carfentanil is 10,000 times more powerful than morphine and 100 times as powerful as fentanyl.

“We’ve seen sometimes in a pinkish powder. We’ve seen white powder, tan powder, gray powder, even like a rock like chunky substance,” Griffin explained. “Any of that can contain any of these things.”

“This is June, July, August, September, October, of just powdered items,” Griffin said as she showed the backlog. “Our backlog is large.”

“We’re at a five-month turnaround right now. Because submissions of drug items and drug analysis are at an all-time high for the year,” Griffin explained. “Right now, we’re getting about 1,200 cases submitted per month. That’s for the whole lab.”

“So far this year, we’ve seen 363 cases,” Griffin said. “We’ll probably see over 400 cases this year of items that were found to contain fentanyl.”

Inside these laboratories, Griffin said scientists are working new cases every single day. Usually 20-30 cases a week on opioids like fentanyl and heroin.

Griffin said officers in the field are told to be extremely careful if they even think they’re dealing with something fentanyl-related.

“We don’t want them to do a field test on it because of how dangerous it could be,” Griffin said.

In the lab, every scientist carries Narcan in their lab coat. Inside is naloxone, an antidote to opioids.

“If you have been overcome by fentanyl, it can bring you back,” Griffin explained.

Griffin shared photos from last summer, when kilograms of fentanyl were brought inside the lab. The forensic scientist wore a full, self-breathing suit.

“Definitely lab coats, gloves, disposable face masks, and the Narcan that we have in our lab coats,” She explained.

Bottom line, Griffin said they’re working tirelessly to identify and get the drugs off the streets and away from homes like yours.

We asked Griffin about hiring more forensic scientists to help get the work done. She said the State of Indiana has it in the budget to get new labs up and running in Fort Wayne, Lowell and Evansville with the next two to three years.

With those laboratories will come new scientists and employees. In terms of hiring new scientists in the labs in Indianapolis, Griffin said that’s uncertain.

Here are resources, contact information, and links you may find helpful.