ISP to use federal grant to buy important, life-saving technology 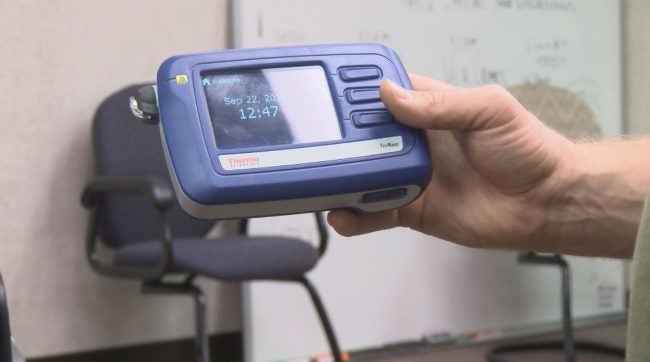 One device they will be purchasing is called a TruNarc.

The device is small enough to fit in a pocket, but it’s size doesn’t downplay its significance.

The device is programmed to detect and identify dangerous chemicals immediately using a laser.

“There are drugs out there that are made to look like they’re illegal drugs, but they’re not,” Sgt. John Perrine of ISP said. “This will allow us to determine whether they’re real or fake drugs.”

The device can also help protect officers in the field.

Last month, Seymour Police warned Facebook users about a batch of heroin laced with a chemical called fentanyl. Officers believe the laced batch caused nine overdoses and one death in Jennings County in one day.

The chemical is so dangerous, police won’t even touch it without proper precautions.

A Tru Narc can tell detectives whether heroin contains fentanyl.

“13 years ago we were barely using computers. We were still handwriting paper work,” Sgt. Perrine said. “You can imagine the technologies we’ve seen change over the last couple of decades in police work.”

ISP already owns five TruNarcs. They cost about $20,000 each.

ISP says they will use part of the Department of Justice’s grant to buy more.