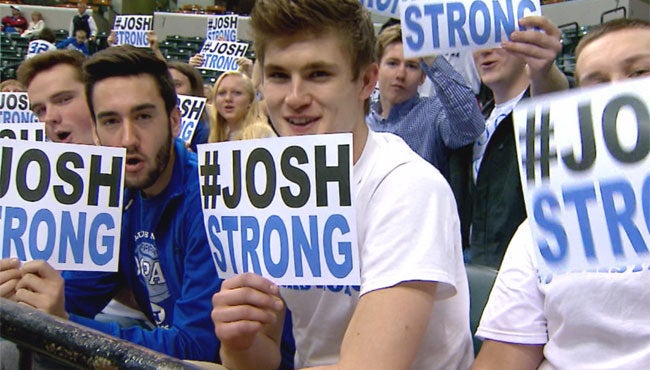 As Josh Speidel continues to recover, many others are joining his team to try and help.

On their biggest stage yet, the Columbus North Bulldogs and their fans once again pulled behind Josh Speidel.

“We all miss him and have support him,” said Jade Reeves, one of Josh’s classmates.

The team was playing the Hoosier Invitational without their power forward, but he was there in their hearts

“Its really cool to see all the support and how we’ve gained support from all different areas and different groups,” said Morgan Neal, another classmate who attended the game.

Prior to the game some of the Pacers gave a video tribute to Josh, and their opponent, East Central wore #JoshStrong t-shirts during warm-ups. Buttons were also sold with proceeds going to Josh’s medical expenses.

“There’s lots of different ways to feel in this sort of tragic incident but we have to do it together and the outpouring of love thatch come from Josh is really something that we’re taking into account and want to see continue,” said head coach Jason Speer.

A GoFundMe site has raised thousands of dollars to help pay for Josh’s medical costs.