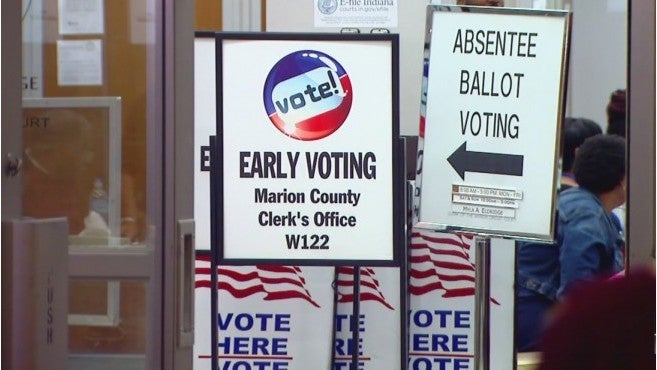 INDIANAPOLIS (WISH) – A federal court judge on Thursday afternoon denied a motion by Indiana Attorney General Curtis Hill to intervene in the creation of early voting centers for the Nov. 6 election in Marion County.

Hill’s court filing Wednesday in federal court had put the state attorney general’s office at odds with one of Indiana’s most powerful state leaders. Secretary of State Connie Lawson, the state’s elections chief, said Wednesday in a statement, “By his reckless action, the Attorney General has disrupted more than 18 months of productive, bi-partisan conversations.”

Fisher said Attorney General Curtis Hill “has asked me to set the record straight on the involvement of the Office of the Attorney General in the Common Cause federal court case regarding early satellite voting offices in Marion County.”

Hill said in the federal court filing Wednesday that he believed a settlement in a 2017 lawsuit that resulted in the expansion of voting centers in Marion County violates state law.

Lawson’s spokesman, Ian Hauer, said Thursday that the secretary of state had no comment after Thursday’s media briefing and stood by Wednesday’s statement.

Lawson and Hill are both Republicans.

Fisher explained Hill’s absence from Thursday’s media briefing. “I’m the one he thought had knowledge of the case,” Fisher said. “So, that’s why I’m asked to speak to you.”

State leaders including Lawson and Republican Gov. Eric Holcomb have called on Hill to resign.

Hill has scoffed at the resignation calls and denied all the allegations.

Asked if Hill has anything to say to his accusers and to people who are squarely in Hill’s corner supporting him, Fisher said, “I’m here to talk about the Common Cause case.”

The Office of the Inspector General is conducting an investigation into the Hill allegations.