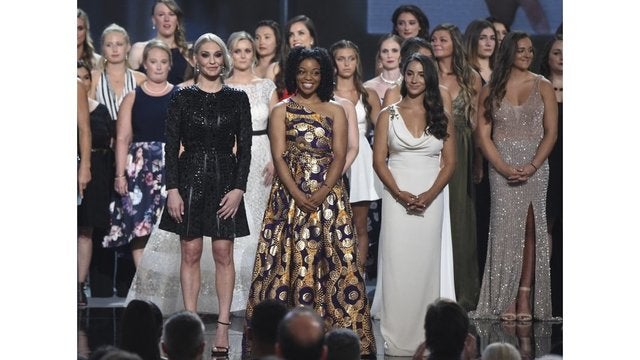 LOS ANGELES (AP) — More than 140 survivors of sexual abuse by a former team doctor for USA Gymnastics and Michigan State University joined hands on stage to be honored with the Arthur Ashe Award for Courage at the ESPYs.

The women who spoke out against the abuse by Larry Nassar stood together Wednesday night in a powerful and solemn closing to the show highlighting the past year’s top athletes and moments in sports.

Kim had tears in her eyes as she listened to the Arthur Ashe recipients.

“We must start caring about children’s safety more than we care about adults’ reputations,” Klein said. “If we can just give one person the courage to use their voice, this is worth it.”

Raisman added, “For too long we were ignored. It could have been avoided. All we needed was one adult to have the integrity to stand between us and Larry Nassar.”

The audience gave the group a prolonged standing ovation and remained on its feet while the women spoke.

“What a powerful stage up here,” host Danica Patrick said before signing off.