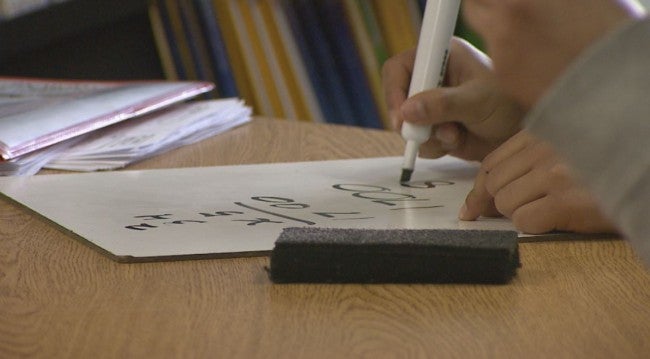 INDIANAPOLIS (WISH) – To take a trip around the world, just take a stroll around Nora Elementary School on the city’s north side.

“We are the true definition of a melting pot,” said Melissa Behny, the school’s literacy specialist.

Of the approximately 700 students here, more than half are originally from somewhere else.

“We have over 28 countries represented. We have 17 languages spoken,” said Principal Amber Walters.

They say it’s a great way for students to learn first-hand about diversity and the world around them.

But it also comes with some hurdles.

“We have kids come in who use a different alphabet,” explained Behny. “It’s not even the ABCs. It’s not written the same way. They don’t know an ‘A’ from a ‘Z.’

Walters said one of the biggest challenges involves the older students.

“When they walk in and don’t have the language, that’s a bigger deficit than a kindergartner walking in without the English language,” she said. “So we have to figure out how to get them the foundational skills while also getting them up to grade level to meet our state standards.”

Students are tested on those state standards with the ISTEP. Nora Elementary will soon begin the test. Tuesday afternoon, teachers practiced their dance moves for a rally to motivate students.

They say the real preparation, though, is in the classroom each day.

“It’s really individualized for kids,” said Behny. “We do a lot of small group work and so we find kids with similar characteristics and similar needs and work with them in small groups and it is every person in this building all the time. I mean we are single-minded in our goal to teach kids to read.”

The school has full-time translators, specialized ENL (English as a New Language) teachers, and aides who work in the classroom with each small group.

Walters said it’s not just the teachers, though. Every Monday through Thursday, more than 100 students stay after school to be tutored by teachers and volunteers from area churches, high schools, and community groups.

“The staff here is truly dedicated but we couldn’t do what we do without our community partners. It’s a community effort to do everything we do,” said Walters, who added that success is measured in steps.

“I know that I have some newcomer ENL (English as a new language) students that are going to sit in front of an ISTEP test next week and they’re not going to pass it,” she said. “But the following year my goal is to help them see growth and to make sure we’re making forward with momentum to get to the end goal we need because ultimately I’m preparing students to graduate from high school. And so if I can just continue to build their reading and math ability to get them to that goal, then we’ve done a great job.”