Local man makes a name for himself in Drone Racing League 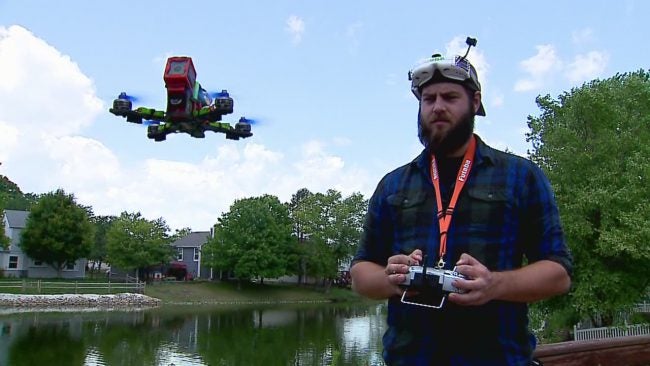 INDIANAPOLIS (WISH) — 25-year-old Paul Nurkkala is adjusting to life as a TV star.

The Indianapolis-based web developer jumped in early on the drone fad. A Christmas gift quickly spurred interest in developing, building and racing drones, and before Nurkkala knew it his backyard was a full-fledged practice course.

“For playing with toys, and that is really what this is, let’s be honest, it is awesome that other people are starting to care,” Nurkkala said.

The Drone Racing League is in its second season, currently airing weekly on ESPN2. The schedule includes six events, concluding with the DRL World Championship in London. The winner of season 2 takes home a $100,000 contract for season 3.

“I think that 50 percent of the sixteen pilots in the Drone Racing League have day jobs,” Nurkkala said. “I for example am one of those. The traveling, racing and new opportunities that drone racing has provided continues to baffle me.”

The “Racer 3” is the current model supplied to all pilots in the Drone Racing League. Everyone lines up with the same exact model, leaving racing talent as the ultimate difference maker. Speed is no joke on tour, as the “Racer 3” can accelerate from zero to 80 miles an hour in just about a second.

“Not everyone drives an IndyCar or can understand what it is like to be a Formula 1 racer, but we all can appreciate what that speed looks like and who those people are,” Nurkkala said. “Those characters and those teams that you get behind. We love it. That is what we are hoping happens with drone racing.”

Is this a niche hobby or the sport of the future? The power of the drone gets to decide that.