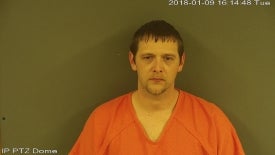 CLOVERDALE, Ind. (WISH) — One man is in custody after allegedly robbing a gas station in Putnam County.

It happened April 6 just after midnight when officers were dispatched to a Casey’s gas station in the 300 block of North Main Street.

32-year-old David Burchett allegedly robbed the gas station with a gun and demanded money, cigarettes and $300 before fleeing the scene.

Officers were later dispatched to a domestic battery call at an apartment where the battery suspect match the description of the robbery. Burchett was later taken into custody and charged with domestic battery.

Further investigation revealed that Burchett was connected to the armed robbery.

He was taken into custody without incident.