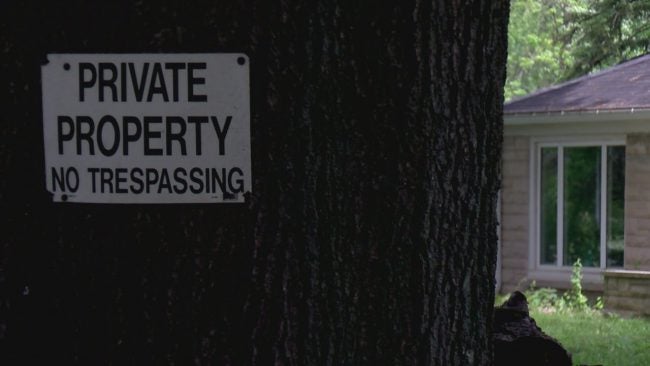 HENDRICKS COUNTY, Ind (WISH) – A man becomes his wife’s hero, after fighting off an intruder. That intruder, police say, was her ex-husband who was wielding nunchucks.

It happened Tuesday night in the 2000 block of State Road 267 near Avon.

The suspect and victim divorced almost 10 years ago. Since then, the victim said she’s had to have a restraining order against her ex-husband and there has been a history of violence. But, since they have two children together, she calls the shooting bittersweet.

“If he could’ve got Dave, he would’ve definitely came after me no doubt,” the woman cried. She didn’t want to be identified but says it all stemmed from a cell phone bill. She says her ex, Anthony “Tony” Casada was upset over their daughter’s bill.

“That escalated (to) all the texting and then it just got worse and worse,” she said.

She says Casada threatened her and her husband, Dave Gregory, the day of the shooting. They had, oddly, just gotten home from celebrating their anniversary. Although they don’t believe Casada was aware of the occasion.

“I’m sitting here at the back patio. My wife is sitting here. My dog starts barking. I see his car pull up,” described Gregory.

Avoiding the “no trespassing” sign, they say Casada got out of the car with nunchucks.

“My thoughts were, ‘he’s going to try and beat me up or kill me with these nunchucks then go take it out on my wife’,” said Gregory.

But Gregory wasn’t going to let that happen.

“I already had my gun out. I reached for my gun. He gets out of his car, in a rage. You could see it in his eyes,” Gregory said.

According to Gregory, Casada came running toward him.

“I told him he’s an idiot. I pointed my gun at him. He kept making progress toward me, swinging his nunchucks and that’s when I shot him,” Gregory said.

“I give all my love and appreciation to my husband. He did a phenomenal job and he’d do it again, for his family. That’s the kind of man he is,” Gregory’s wife said.

The kind of man, she says, Casada was not.

“I think it’s finally over. Unfortunately it came to this. No, I do not wish death upon nobody. I don’t want him to pass away. But, he is in the situation he’s in because he put himself there,” she said.

Casada was shot six times. He is in critical condition in the ICU at Eskenazi Hospital. Police say Gregory does not face criminal charges at this time, because he was acting in self-defense.