Mayor, police chief tour one of Indy’s most troubled neighborhoods 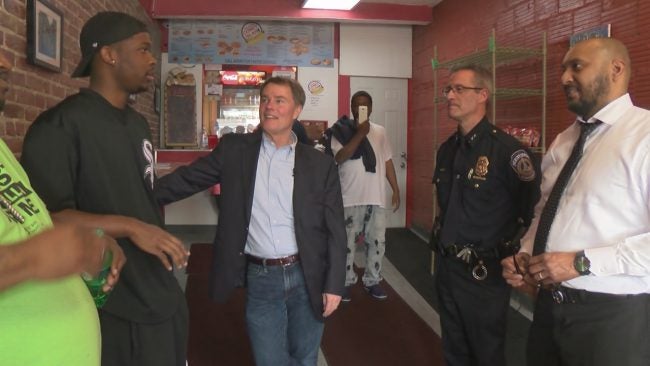 INDIANAPOLIS (WISH) – The city’s top cop teamed up with the mayor Saturday to walk the streets of one of Indy’s most challenged neighborhoods.

Their goals: build trust and listen to community concerns near 10th  and Rural streets.

IMPD Chief Bryan Roach said people in the neighborhood are more than twice as likely to be around a fatal shooting compared to anywhere else in the city.

Roach walked side-by-side with Mayor Joe Hogsett listening to stories from locals. They checked in with business owners and asked what the city can do to improve the area.

Rosie Lewis, who runs a barbecue truck in the area, credited Hogsett with getting drugs off the streets.

“I’ve been down here for years on these streets, and I have seen a big difference,” Lewis said.

The area is also plagued by stories of young people who died too soon, kids who are just trying to be kids and a mom, Tanya Whitfield, who is tired of neighborhood drug dealers.

“They’re selling dope and just all types of crazy stuff to where you can’t let your babies outside. I know I don’t let my babies outside,” Whitfield said to Hogsett.

Then there’s the tale of the business owner on 10th Street, Julie Crow, who spoke up for the locals when she saw Hogsett.

“A lot of the longtime residents and homeowners who have been here ever since they were children, they’re just very discouraged,” Crow said. “They’re afraid to come out of their houses. They don’t feel safe on their own streets,” Crow continued.

“Keep watching and keep us informed because we want to do everything we can,” Hogsett replied.

The mayor and the police chief plan on adding another chapter to the story.

“We’re trying to make a lot of investments on this side of town,” Hogsett said. “Trying to help the residents out with housing, retail and commercial investment.”

10th and Rural’s tale has its twists and turns, its ups and downs, its trials and tribulations. It’s a story that deserves a happy ending.

“It’s disheartening when anybody lives in fear and it’s our job to make sure that changes,” Hogsett said.

Police said last month a tip led to the arrests of 12 people at a drug house known to locals as “The Candy Store.” Chief Roach said the more people trust the officers, the more likely people will be to call in tips.