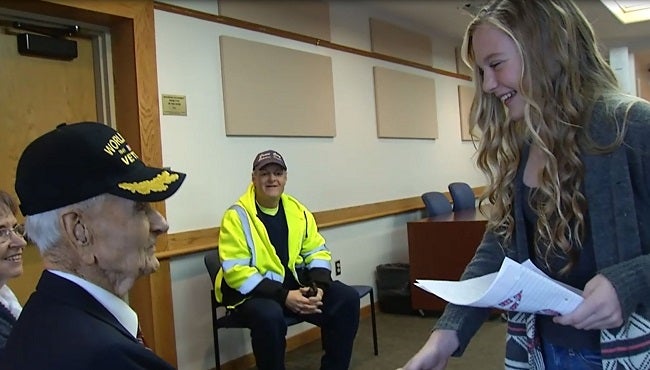 COLUMBUS, Ohio (WCMH) – A World War II veteran discovered the thank you letter he’s been carrying around for two years is from a 10-year-old girl who lives just a few miles away.

Ray Ruoff lives in Grove City and was handed the letter in D.C. after an Honor Flight.

The 97-year-old said even with the honors and medals he has kept over the years, the letter means the most to him.

“A little girl like this to write a letter for a service member, you certainly appreciate it,” veteran Ray Ruoff said.

After NBC4 put up an article about Ruoff’s love for the letter, a family friend reached out and said he knew the author.

Andersen Hamilton is now 12-years-old and lives in Grove City, too.

Ruoff was a police officer for 26 years and the Grove City Police Department decided to host the pair.

Hamilton said she wrote the letter on Veteran’s Day in 2013. She didn’t know who it was going to, but knew it would reach someone she wanted to be just like.

“I’m not only honored to meet you, but I’m truly blessed to be able to talk to you and share my excitement of how much you mean to me,” Andersen Hamilton said to Ruoff.

Ruoff and Hamilton plan to meet again and continue their long-awaited friendship.