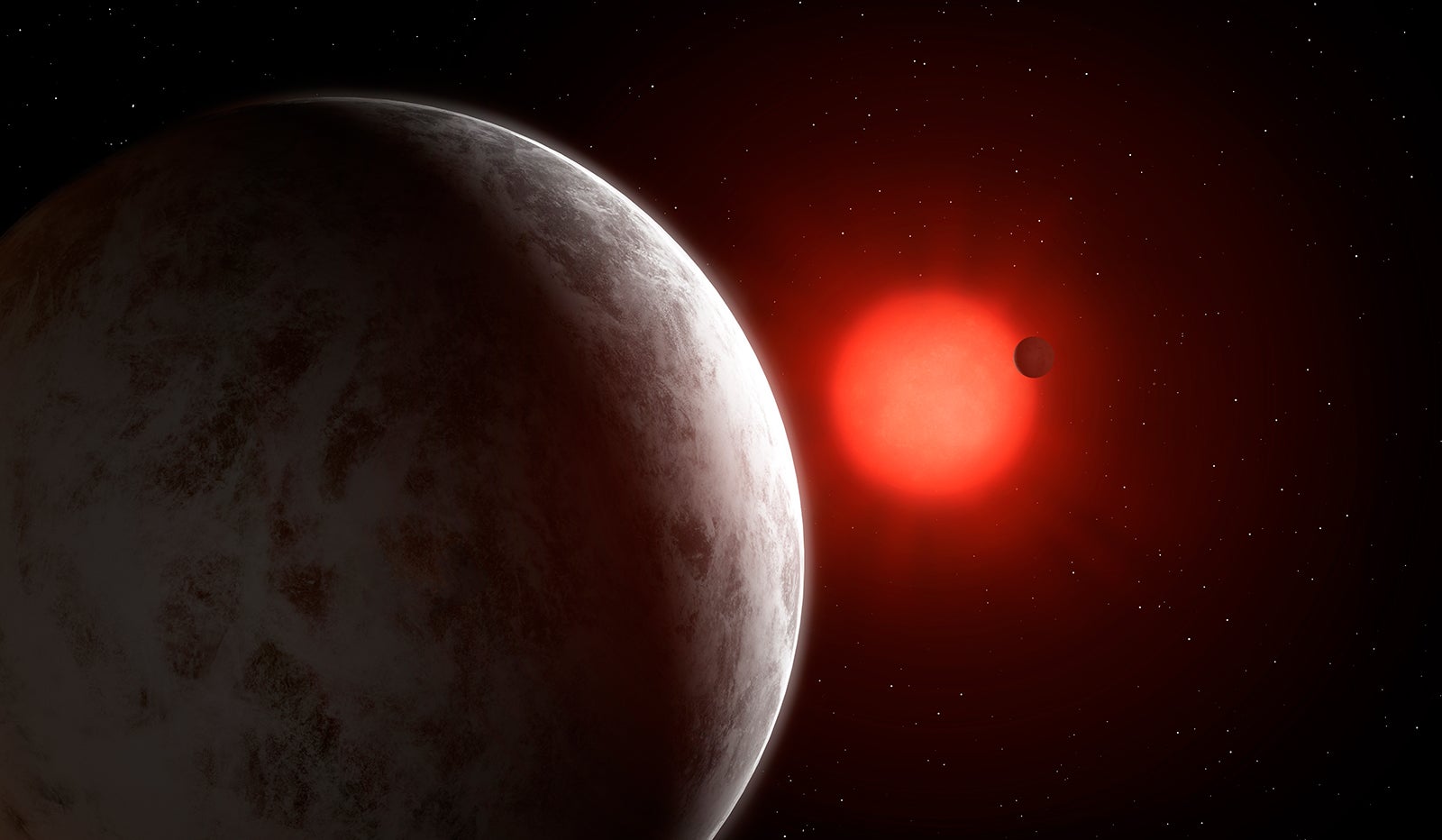 (CNN) — Astronomers have discovered two super-Earth exoplanets orbiting a star 11 light-years away from Earth, according to a new study. There is also a potential third planet orbiting a bit further away from the star, according to the researchers.

The proximity of this intriguing nearby planetary system will enable it to be studied more in the future, the researchers said.

The star, Gliese 887, is a small, dim red dwarf star with about half the mass of our sun. But given its proximity, it’s the brightest red dwarf in the sky. It’s also one of the closest stars to our sun, even though it’s far from the reach of any spacecraft technology we have today.

A team of astronomers working on the Red Dots project, which is attempting to find terrestrial exoplanets closest to our sun, observed the star using the European Southern Observatory in Chile. The team observed the star every night for three months. The High Accuracy Radial velocity Planet Searcher, known as the HARPS spectrograph, detected two planets around Gliese 887.

The spectrograph was able to detect the planets using a technique astronomers call the “Doppler wobble” or radial velocity method. This so-called wobble occurs when the star moves back and forth due to the gravitational pull of the planets orbiting it. The HARPS instrument can measure these tiny wobbles.

This data was combined with other archival data including measurements of the star that went back 20 years.

The astronomers dubbed the planets Gliese 887b and Gliese 887c. The first planet completes one orbit around the star every 9.3 Earth days, while the second takes 21.8 Earth days to complete one orbit.

They also detected a signal further out that could correspond to a planet that takes 50 Earth days to complete an orbit around the star.

This study published Thursday in the journal Science.

The planets are referred to as super-Earths because they are larger than Earth but still smaller than planets like Uranus and Neptune. And both of them are close to the habitable zone of the star, a place where terrestrial planets can support liquid water on their surfaces.

Since the star is much cooler than our sun, its habitable zone is much closer in range to the star — meaning that the planets closely orbiting it are also potentially within that range. The two super-Earths, however, are a little too close for comfort, meaning they’re too hot to maintain liquid water.

Both receive between 2.5 and eight times more energy from their star than Earth receives from the sun.

But the third potential planet, which could also be a super-Earth, could exist in the star’s habitable zone.

In observing and studying the star, the researchers discovered some good news.

“The host star is the best star that is in close proximity to the Sun because it is an unusuallyquiet star,” said Sandra Jeffers, lead study author and lecturer at the Institute for Astrophysics at the University of Göttingen in Germany, in an email to CNN. “By a quiet star, I mean that it doesn’t have the dark starspots or the energetic outbursts [flares] that we see on the Sun.”

If the star was as active as our sun, its stellar wind would erode and sweep away the atmospheres of the planets. The researchers believe that since the star is quiet, the planets around it could have retained their atmospheres. They may have atmospheres thicker than Earth’s.

“If someone had to live around a red dwarf, they would want to choose a quieter star like GJ 887,” wrote Melvyn Davies, professor of astronomy at the department of astronomy and theoretical physics at Lund University in Sweden, in a related Perspective article. Davies was not involved with the study.

The star’s brightness is also very constant, which means it might be easier to detect the potential atmospheres of these planets, making them perfect targets for upcoming missions like NASA’s James Webb Space Telescope. The telescope, expected to launch next year, can peer through the atmospheres of exoplanets and help characterize their compositions.

“By studying the atmospheres of these planets scientists will be able to understand if the conditions are amenable for life,” Jeffers said.

Previously, the Red Dots team found other exoplanets close to our sun, like the planets orbiting Proxima Centauri and Barnard’s star. Studying these nearby exoplanets could help astronomers learn more about the formation and evolution of stars and planets, as well as search for life beyond Earth.

In the future, Jeffers and her team want to observe Gliese 887 more to determine if the third signal belongs to a planet.

“If further observations confirm the presence of the third planet in the habitable zone, then GJ 887 could become one of the most studied planetary systems in the Solar neighborhood,” Davies wrote.