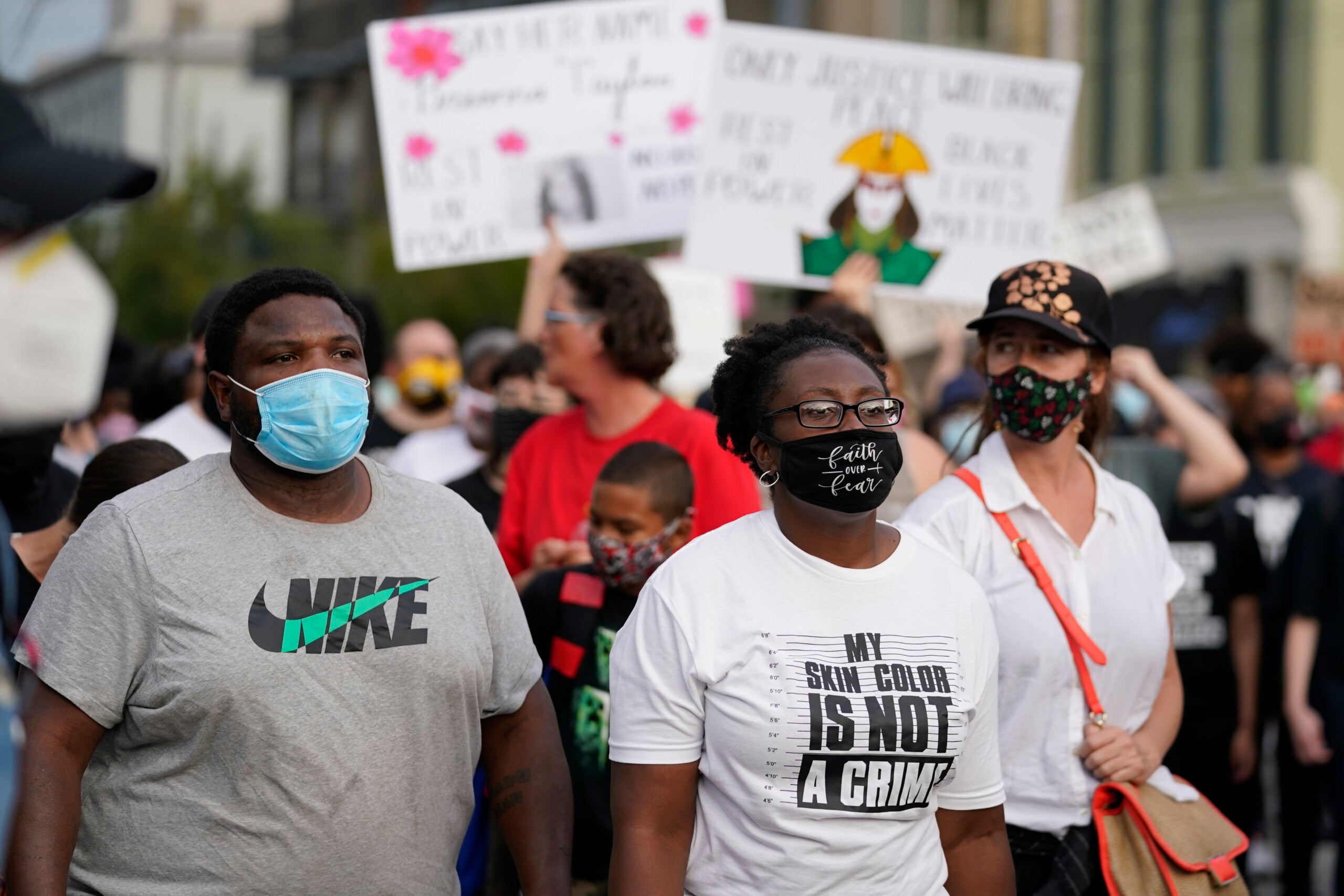 LOUISVILLE, Ky. (AP) — A diverse crowd of hundreds marched in Louisville’s streets chanting “Black Lives Matter” on Saturday night, the fourth night of protests after a grand jury declined to charge officers in the fatal shooting of Breonna Taylor.

People in the crowd also chanted “No Justice, No peace” as cars honked along a busy downtown artery in this Kentucky city that has seen more than 120 days of demonstrations over the death of the 26-year-old Black woman in a police raid gone wrong.

A few police cars followed behind, with officers telling protesters to stay on the sidewalk and out of the street before the march ended. Many briefly ended up back at a downtown square that has been a focal point of protests.

But as a 9 p.m. curfew time approached, a police loudspeaker announced that anyone who remained in the park would be arrested for a curfew violation. The square emptied out as people departed, many dispersing though one group headed to a nearby church where protesters had found refuge on previous nights.

A previous protest on Friday night was peaceful though police arrested 22 people for curfew violations. A police spokesman said some also were charged with failure to disperse.

“I’m mindful that many in our community are hurting and angry about the decisions announced this week,” Fischer said. The mayor said he supports protesters’ First Amendment rights to protest though “we just ask you to do that peacefully please.”

Taylor was shot multiple times March 13 after her boyfriend fired at officers who had entered her home during a narcotics raid by white officers, authorities said. Taylor’s boyfriend said he didn’t know who was coming in and fired in self-defense, wounding one officer.

On Wednesday, Kentucky Attorney General Cameron announced a grand jury indicted one officer on wanton endangerment charges, saying he fired gunshots into a neighboring home during the raid that didn’t strike anyone. That officer has been fired.

Cameron said the other officers were not charged with Taylor’s killing because they acted to protect themselves.

Taylor’s mother, Tamika Palmer, visited a downtown park on Friday with family and her lawyers, and called on Kentucky officials to release all body camera footage, police files and the transcripts of the grand jury proceedings. Palmer said in a statement read by a family member that she felt the criminal justice system had failed her. Palmer marched at the head of Friday’s protest march.

The grand jury’s ruling weighed heavily on protesters like Amber Brown. A central figure in the downtown demonstrations, Brown said she was angry.

“It feels like we went backward,” she said Friday night. “I think people are still in shock and we’re not sure how to move forward.”

Brown criticized the police crackdown in the downtown area that has been in effect since early in the week.