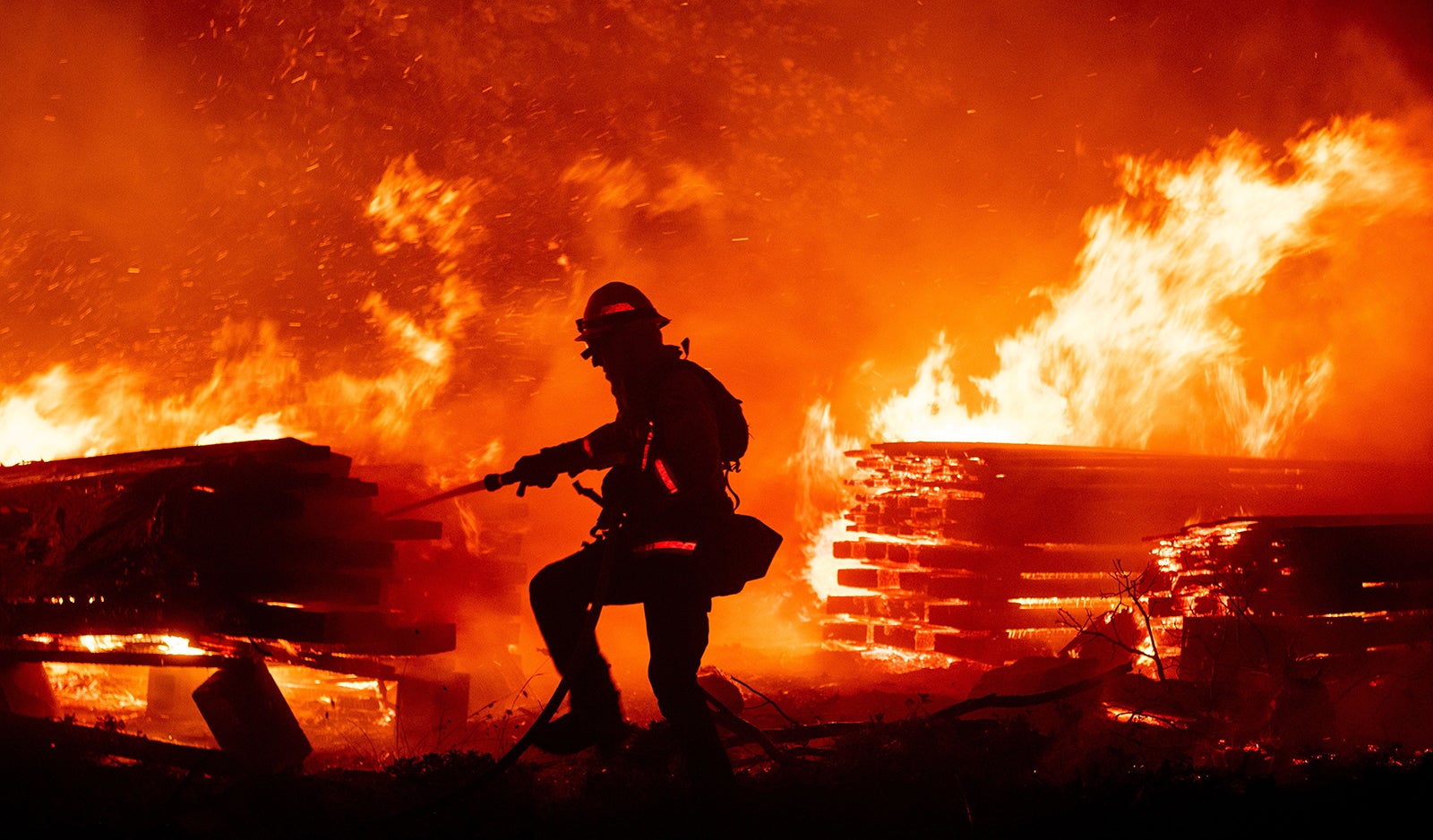 A firefighter douses flames as they push towards homes during the Creek fire in the Cascadel Woods area of unincorporated Madera County, California on September 7, 2020. - A firework at a gender reveal party triggered a wildfire in southern California that has destroyed 7,000 acres (2,800 hectares) and forced many residents to flee their homes, the fire department said Sunday. More than 500 firefighters and four helicopters were battling the El Dorado blaze east of San Bernardino, which started Saturday morning, California Department of Forestry and Fire Protection (Cal Fire) said. (Photo by JOSH EDELSON / AFP) (Photo by JOSH EDELSON/AFP via Getty Images)
by: Hollie Silverman, Stella Chan and Jason Hanna, CNN
Posted: Sep 8, 2020 / 12:14 PM EST / Updated: Sep 8, 2020 / 12:14 PM EST

Three helicopters picked up the new evacuees from the Lake Edison and China Peak areas of the forest early Tuesday, the National Guard said.

“We’ve made multiple attempts the past couple of days trying to get to those remote camp sites,” Army National Guard Col. David Hall told NBC’s “Today” show Tuesday. “Weather and the smoke are cooperating with us better, and we’re going to keep working tirelessly…until we get out as many people as we can.”

More than 200 other people were airlifted from the forest to safety over the weekend because of the Creek Fire, which officials said has burned 135,523 acres in the Sierra Nevada Mountains northeast of Fresno. It has no containment since it began Friday night, and its cause is under investigation.

Dozens of people, including hikers and campers, still couldn’t leave the forest by themselves because fire had blocked paths out, Fresno County fire officials said Monday night. People were taking refuge in four locations.

As of Tuesday morning, park visitors waiting to be rescued were not in immediate danger, but they would eventually be at risk if the fire grows, Hall told “Today.”

The Creek Fire has forced evacuations in Madera and Fresno counties. The fire is an “unprecedented disaster” for Fresno County, US Forest Service Supervisor Dean Gould said Monday, adding that while major wildfires have occurred in the area before, this fire is the “most aggressive of any of those.”

The wildfire has caused heavy structural damage, and current conditions prevented damage inspection teams from getting into the areas to survey exactly how many structures have been lost, a Cal Fire official said during the briefing.

At least 22 large fires are burning in California, where dry, windy conditions and record-breaking high temperatures have been fueling flames for weeks in some areas.

Another is the El Dorado Fire in Southern California’s San Bernardino County, which officials say was sparked Saturday morning by a pyrotechnic device used during a gender reveal party. That blaze has scorched 10,574 acres and was 16% contained as of Tuesday morning, officials said.

Weather conditions will mean high fire risks from Washington to Arizona — including much of California — Tuesday and Wednesday. As of Tuesday morning, areas covering more than 38 million people in six Western states were under red flag warnings, which caution that conditions likely to start or spread fires — strong winds and dry conditions — were imminent or happening.

Wind gusts of 30 to 55 mph are possible in parts of California on Wednesday, CNN meteorologists said.

“Wind like this will fuel (fires) and move them along. If you get evacuation notices today, you need to pay attention to them. These fires will be moving very, very quickly,” CNN Meteorologist Chad Myers said.

While firefighters battle flames and rescue people from dangerous areas, a utility is temporarily shutting electricity service for tens of thousands of customers.

Pacific Gas and Electric (PG&E) is intentionally cutting power in 22 Northern California and Central Valley counties to lessen the chance that any electric equipment damaged by winds would cause more fire. About 172,000 PG&E customers were expected to be impacted by Tuesday afternoon, with full restoration expected by Wednesday evening.

Another safety measure due to the “monumental fire threat” is the closure of national forests in Southern and Central California. Statewide, all campgrounds will be closed for day use and overnight camping starting Monday night, the US Forest Service said.

“Most of California remains under the threat of unprecedented and dangerous fire conditions with a combination of extreme heat, significant wind events, dry conditions, and firefighting resources that are stretched to the limit,” the release said.

Closures mean no hiking, biking, fishing or even taking scenic drives. The Forest Service hopes closures will reduce the potential for fires caused by humans. They will be re-evaluated daily as conditions change.

“The wildfire situation throughout California is dangerous and must be taken seriously. Existing fires are displaying extreme fire behavior, new fire starts are likely, weather conditions are worsening, and we simply do not have enough resources to fully fight and contain every fire,” said Randy Moore, regional forester for the USDA Forest Service Pacific Southwest Region.